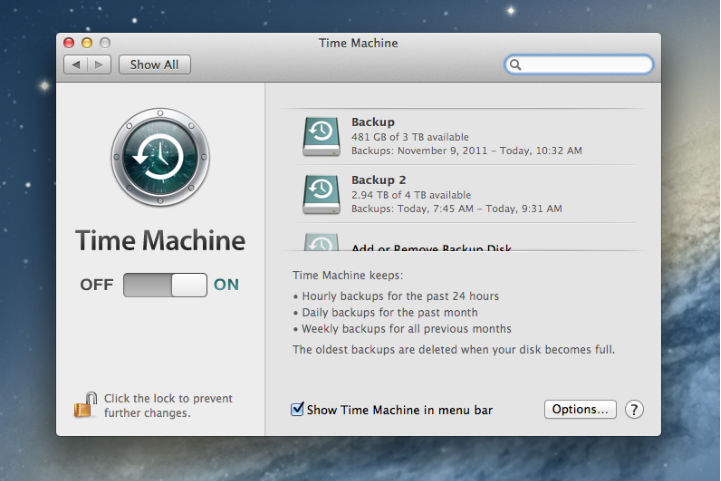 Earlier this week was “World Backup Day,” a day that we were supposed to think about how we backup our computers’ data. Of course, one shouldn’t need a special day just for that, as it’s an ongoing concern. Case in point: I needed to reinstall OS X last week on my Mac Mini, and that required erasing my hard drive. Fortunately, I had everything backed up, so I was able to restore it all.

There’s a lot of varying advice on backup strategies, but here’s what I use at home for my computers. While I’ve written about backing up data before, some of it’s changed since the few years I wrote about it.

Google Drive is the cloud storage service I’ve been using since moving from Dropbox, and it’s worked well for storing my documents. Besides serving as a cloud backup, it also lets me access my documents from either my Chromebook or Mac easily.

Google+ Photos is the default automatic cloud photo backup storage for Android devices, but it works well enough that it’s where I now store all of my photos, both from my phone and from my camera. I still keep offline copies on my Mac, however.

Flickr was my longtime photo hosting choice, but changes in Flickr’s service and convenience led me to decide to switch to Google+ Photos. I still have some of my photos on Flickr, however, and I’m considering repurposing my Flickr account for something else. Maybe hosting just select Creative Commons-licensed photos of mine? Creative Commons is one of Flickr’s strengths, and something Google+ Photos doesn’t really offer.

I’ve backed up my music files to Google Play Music for similar reasons as Google+ Photos above. Google’s music hosting lets one upload up to 50,000 music files for free; the files can be played via Android’s music player app or Google Play Music’s web player. The usual playlists, etc. are also offered. More Spotify-like services are also available if one pays for All Access.

Again, the convenience factor here, as well as being free, is a strong reason for my using Google Play Music. I don’t have to connect my Android phone to my Mac to transfer music files anymore, and I can access my entire music collection from any of my devices.

I still have copies of the original files on my Mac, of course, which’re stored in iTunes. However, I infrequently use iTunes these days, between using VLC as a video player and Google Play Music’s web player.

While the cloud is convenient for storage, I also keep copies of my files at home. For that, I use Time Machine, OS X’s backup program, and an external 2TB hard drive. (There’s an older 1TB external drive as well, but it’s just storing video files/serving as extra space.) Time Machine’s very convenient, easy to use, and works well at restoring files, as I saw when I used it last week to restore my hard drive. It also lets me keep backups of some files I’d rather not store in the cloud, particularly very large files (basically videos) and a few personal files.

If one’s not a big fan of Google for cloud storage, my cloud alternatives include:

Of the three above, I’d favor Dropbox the most, as it’s the most platform neutral, flexible, and works well on every device. If you really want Office 365, however, OneDrive is the way to go. And Amazon’s service might be worth considering if unlimited-tier storage is a priority.

For local backup alternatives to Time Machine, I don’t have any to suggest for Windows users. However, Linux users can try Back In Time, a Time Machine clone that’s a GUI front-end for rsync. Of course, there’s also just manually copying files to a backup drive, though that requires remembering to do so on a regular basis.

EDIT: This marks my 2,000th blog post! A milestone reached!

Windows 7 dominates desktops, while Chrome OS rules US schools
How I set up my new Windows 10 laptop (and thoughts on switching to Windows)
My choice of music services (fall 2014)
My recommended streaming video services (fall 2017)
Share this post