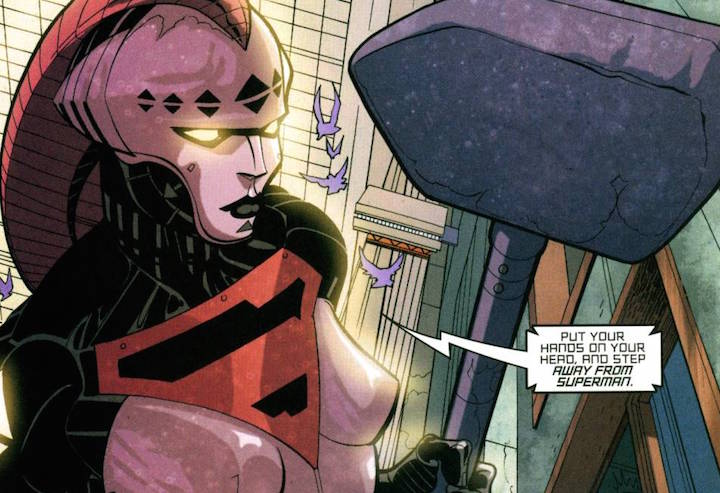 This week’s minorities in cartoons entry is Natasha Irons, a DC Comics character.

Natasha first appeared in “Steel” #1 in February 1994. She was created by writers Louise Simonson and Jon Bogdanove, and artist Chris Batista.

Natasha’s first appearance was as a teenage intern of a senator in Washington, DC. This later changed with a different writer (Christopher Priest), with Natasha undergoing a more brash personality change. She also deals with her father, a villain named Crash. Natasha also eventually befriends a boy named Paul, who she nicknames “Boris.” (Neither one had a loathing of moose or flying squirrels, as far as I know.)

When John Henry opens his company, Steelworks, in Metropolis, Natasha moves there to join him as an assistant. Eventually, John Henry’s forced to retire from his role as Steel. He turns it over to Natasha, with her own custom suit.

Later, John recovers, but has a falling out with Natasha during the events of “52,” which sees John deactivate her suit. Not having luck with designing her own suit, Natasha decides to sign up for Luthor’s “Everyman Project,” a project Lex Luthor started to give others superpowers. Natasha thus gained superhuman strength and flight powers, and became the heroine “Starlight.” After awhile, Luthor strips Natasha (and the others in the project) of their powers. Fortunately, Natasha reconciles with John and the two bring Luthor to justice.

Natasha resumes working at Steelworks, but discovers Luthor’s powers had a residual side-effect: she gained the ability to turn into a gaseous form. Natasha decided to assume the superheroic identity of “Vaporlock.”

Natasha appeared in an episode of “Superman: The Animated Series.” She was voiced by Cree Summer.