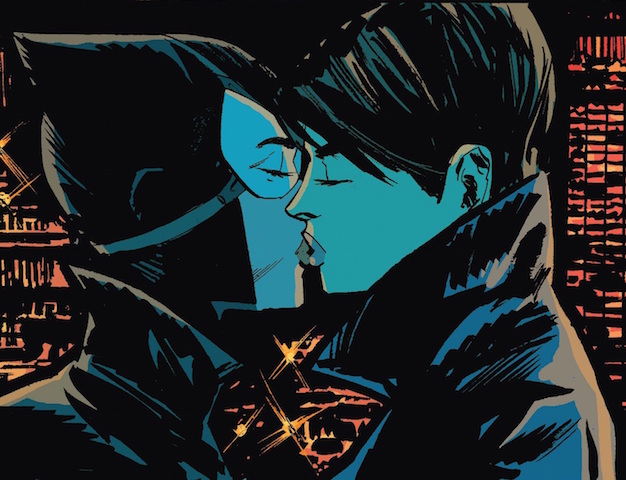 This week’s “Catwoman” #39 sees a big revelation on the part of its writer, Genevieve Valentine, and DC Comics overall. The story revealed that Selina “Catwoman” Kyle is bisexual.

The storyline of “Catwoman” recently has been about Selina becoming the head of a crime family and dealing with its repercussions, including becoming close to a woman named Eiko Hasigaway, the daughter of a Yakuza crime family, who’s become the new Catwoman. As such, this week’s issue saw them kiss for the first time. The writer promises she has DC’s full support, and that she plans to fully use Eiko in an upcoming storyline. More details about all of this are available on The Mary Sue.

DC’s attempts at diversity in recent years have left a lot to be desired, especially compared to Marvel/before the New 52 reboot. Selina herself didn’t get her New 52 title reboot on a great foot, either. However, this is still a big deal for one reason. While DC has various LGBT characters—Batwoman, Maggie Sawyer, etc.—Catwoman is something those others aren’t: a household name. Nearly everyone knows who Catwoman is, including non-comic fans, thanks to the 1966 Batman TV show, the various movies, or “Batman: The Animated Series.” By revealing Selina’s bisexual, she instantly becomes DC’s highest-profile LGBT character, and possibly superhero comics’ most high-profile one in general.

Fan reaction online so far seems a bit more muted than I’d expect. It might be from other pop cultural news dominating on Wednesday, namely the “DuckTales” revival, which even made it into the Wall Street Journal and CNN of all places. Or it might be how media (mis)handles the subject of bisexuality in general, though from a Google search, the story seemed to finally make the mainstream media rounds by Thursday afternoon. Still, one of the main reactions so far is concern about disrupting the traditional pairing/would-be-pairing of Batman and Catwoman. Of course, such concerns ignore how being bisexual works, as Valentine points out. Not to mention, modern DC Comics’ beaten to death the idea that Bruce has the personality/humanity of a brick and no capability/time for “normal” stuff like romance. (Boy, he’s more “relatable” than that “too powerful” guy from Metropolis, all right.)

Hopefully, DC handles Selina well in the future, though it’s too bad she can’t marry her new girlfriend. DC (and head honcho Dan DiDio) don’t want their characters to look “old” or “tied down,” even if Selina’s been around since “Batman” #1 in 1940.