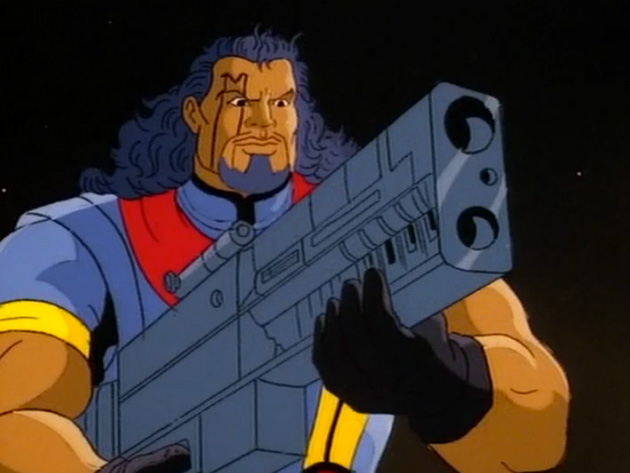 Bishop’s backstory is extremely convoluted and, well, extreme in general. This stems from his being A) an X-Men character, B) a time traveller, and C) a 90s comic character. Still, I’ll try to give a greatly simplified version. (Full details are on Wikipedia.)

Lucas was born about 80 years into one of the various possible futures of the Marvel universe. Lucas’ future is one where most mutants were captured and placed in concentration camps. The captured mutants were branded with an “M” (that weird M-shaped tattoo Lucas has on his eye).

Later, a former fellow officer-turned-evil named Fitzroy was imprisoned, but escaped. Using a time portal, Fitzroy and some of his cohorts escaped back in time to the present day, with Bishop following. After various hijinks ensued, Lucas soon met his historical heroes the X-Men. He soon joined the group, and participated in various adventures.

Many of Bishop’s adventures are complicated stories. That’s because they often involve time-travel, his knowledge of the (possible) future, and being an anti-hero. As an example, he’s crossed paths with Cable. Cable’s another time-traveling X-Men character from a different alternate future.

Bishop’s mutant power is to absorb and expel kinetic energy. However, his more defining aspect is carrying around various oversized firearms. (Again, the 90s.)

Bishop’s gone on to appear in various X-Men media, almost all of it with a less complicated backstory than the above.

Bishop’s first live-action appearance was in the theatrical film “X-Men: Days of Future Past.” He was played by French actor Omar Sy.