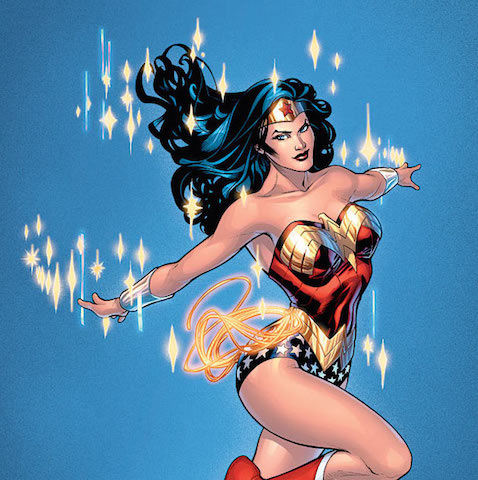 I don’t know how often superheroes get mentioned in publications aimed at the politicians of Capitol Hill, but Wonder Woman’s been mentioned in such a publication. The newspaper “The Hill” is a daily paper (when Congress is in session) that’s for and about Congress, including topics such as lobbying, investigative reporting, and profiles on various Congresspeople.

Of interest is a story reporting that Lynda Carter, the actress that played Wonder Woman in the famous 70s TV show, is backing Hillary Clinton for the 2016 presidential race. As the article notes:

“[Hillary] can have my Lasso of Truth,” Carter, 63, said with a smile. The fictional weapon was “formed from Aphrodite’s girdle and forced whomever was bound with it to obey the commands of whomever held the other end,” according to a fan website.

Of course, Wonder Woman’s “Lasso of Truth,” or magic lasso, is her most famous accessory/weapon. As “The Hill” alludes to, it’s a magical lasso that’s super-strong, unbreakable (even for the likes of Superman), and has been part of the Wonder Woman comics since day one. While pre-Crisis comics (stories before her 1987 reboot by George Perez) stated whoever holds the lasso is compelled to obey the orders of the rope’s holder, it’s since been officially toned down to mere truth-telling. I assume DC/Perez decided its older ability is either too powerful or too mind-control-/bondage-like? However, various post-Crisis stories show it being used for similar purposes or a bunch of other bizarre stuff anyway. Unimaginatively, the New 52 comics (and recent non-comics media increasingly) usually show Princess Diana wielding a sword instead of a lasso, one of the various recent negative changes to the Amazing Amazon by her corporate owners.

On a final note, I recall the line in the mid-90s humor comic “Sergio Aragones Destroys DC” where Wonder Woman mentions her lasso “exploding” the last time she used it on a politician…