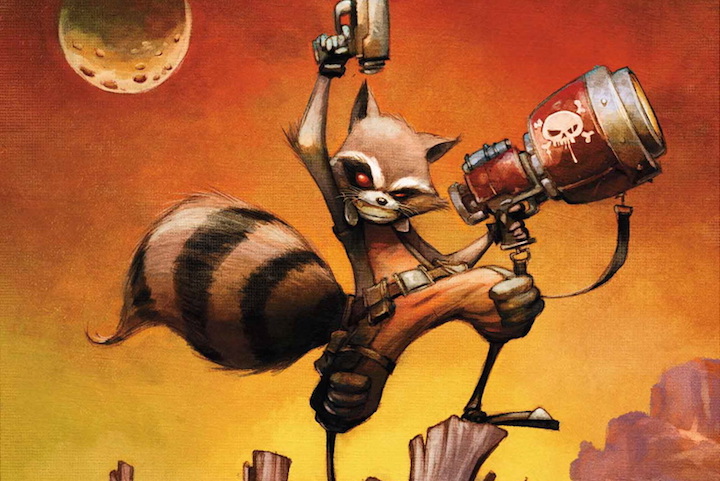 For comic books, sales figures are as follows:

Other than a single Image comic (their top-seller “Walking Dead”), Marvel completely dominates the top 10. The highest selling DC title comes in at #14, “Batman” #32. While TWD and “Rocket Raccoon” got a boost by Loot Crate (a company that buys various pop cultural stuff, including comics, to sell in packages to customers), I’d say that’s still a sale.

Still, an independent book about zombies and a Marvel book about a talking raccoon topping every DC comic published last year doesn’t sound promising to the World’s Finest’s home. Cash-cow and sales crutch Batman? Superman/Wonder Woman romance (or “fauxmance” as some have taken to calling it) and Amazons as murderous succubi? The cynical grimdark elements, costumes, etc. that’ve become DC’s/New 52’s signature? Batgirl’s revamp (admittedly a positive thing, transgender issues aside)? Apparently all of it paled sales-wise against…a book about a talking raccoon.

I also notice “Thor” #1 was in the top 10—one of Marvel’s bids for increased diversity in comics. While full sales figures aren’t in yet and it’s not in the top 10, I’ll assume “Ms. Marvel” also did well. It’s supposedly popular for digital sales figures, which wouldn’t be reflected in Diamond’s figures.

The top selling comic, “Amazing Spider-Man” #1, is reflective of superhero comics’ more dubious aspects: it’s a new #1 issue and sold for a whopping $6, or $3 less than what a month of Netflix (with various Spider-Man related material available) would cost.

Of course, in trade paperback sales, things are the polar opposite from floppy comics’ superhero-dominated sales. The top 10 are as follows:

Outside of the ninth place entry as the sole superhero title (DC’s Batman), the top 10 list is entirely dominated by non-superhero material, and all from Image: “Saga,” “Sex Criminals,” and perennial favorite “The Walking Dead.” I wonder if the trade paperback sales list is more reflective of the general public’s tastes in comics. Superhero comics are usually in the minority of trade sales, trades are more widely available in stores “regular” book readers shop at (Amazon, Barnes and Noble, etc.), and there’s a greater diversity of genres shown in sales. All differing from DC/Marvel superheroes’ near-total control of floppy comic sales.

Of course, DC/Marvel still control two-thirds of the comic shop market in unit and dollar sales. However, sales for everyone, including Image in particular, have risen since 2013.