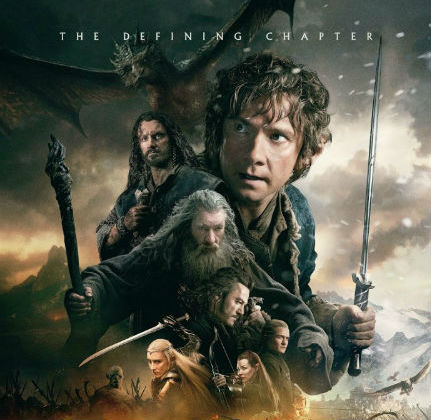 As expected, “The Hobbit: The Battle of the Five Armies” raked in the cash this weekend at the box office. The weekend alone earned the final “Lord of the Rings”-related film $56.2 million, with its earnings since opening Wednesday at $90 million. Overseas, the film’s pulled in $265 million, for a total of $355.6 million globally.

Elsewhere on this crowded box office weekend, “Night at the Museum: Secret of the Tomb,” the third film in the “Museum” series, came in second place. The film opened with $17.3 million. Overseas, it’s earned $10.4 million, for a total of $27.7 million.

In third place is “Annie,” which earned $16.3 million in its opening weekend. While slightly less than “Museum,” “Annie” also cost about half of that film’s budget to produce. Some have wondered how well “Annie” will do overseas, with Forbes claiming “an uncomfortable truth” that “black stars don’t play as well overseas as domestic.” That, however, ignores the box office figures of Will Smith, or that Denzel Washington’s recent film “The Equalizer” pulled in half of its nearly $200 million take from overseas sales. I’d blame Hollywood marketing if anything, plus the mindsets of Hollywood executives—the recent Sony hack exposing they’re basically Dilbert’s Pointy-Haired Boss with some racism/sexism thrown in. I’d also note that “Annie” was one of the films leaked and pirated online in that same Sony hack. “Annie” doing that well despite the hack suggests people will still pay for entertainment even if it’s been pirated, which’d undermine more of Hollywood’s pre-conceived mentalities.

In fourth place is “Exodus: Gods and Kings,” which as I predicted made an exodus down the box office charts, plummeting -66.6% from last weekend to earn $8.1 million. Its totals stand at $38.9 million domestic and $61.2 million overseas, for a global total of $100.1 million. While Box Office Mojo is already branding it a flop (for good reason per its $140 million budget), it’ll probably pull in more overseas versus here in North America.

Next weekend’s Christmas, which sees a large number of films opening: crime drama “The Gambler,” Disney family film “Into the Woods,” and war drama “Unbroken.” Notably missing is the pulled Sony film that’s been in the news for the past week, “The Interview.” Its abysmal-sounding quality and questionable plot aside, I imagine it would’ve been crushed by all of these other films. If Sony/the general public really need to see a film about assassinating a still-living non-fictional leader of another nation (?!), they can release it where it should’ve gone in the first place, straight to DVD/Netflix.