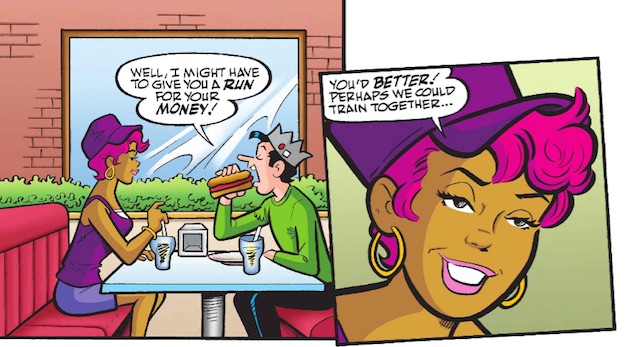 This week’s minorities in cartoons entry is Toni Topaz, a supporting character in Archie Comics.

Similar to Kevin Keller and Jughead, she also possesses a voracious appetite, which she put to use in a cupcake eating contest that Jughead entered. However, Jughead was forced to forfeit after needing to find his missing preschool aged sister, Jellybean. Since then, Toni’s been hoping to challenge Jughead at a rematch.

Toni’s made at least one other major appearance, in “Archie” #654 (May 2014). There, Toni took part in a speed dating day held at the Chocklit Shoppe. She met and had a short conversation with Jughead, who (per his dislike of dating/romance) was only there for the buffet Pop Tate’s serving.

Despite her few in-story appearances, Toni (like Trev Smith) has made a rather large number of appearances on Archie comics covers, promotional materials, etc. Her distinctive appearance probably makes her a popular choice for such, though hopefully she’ll get more than just cameos in the future.