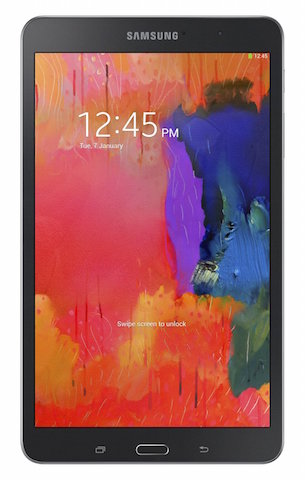 Last week, I bought a new tablet, the Samsung Galaxy Tab Pro 8.4. The first-generation Nexus 7 I’ve had since 2012 is starting to die (problems waking up, sluggish performance even before upgrading to Android Lollipop, etc.), and I ultimately decided it was time for a new tablet. I bought the Galaxy based on trying it out in person, strong reviews and few other tenable Android options; the leading alternative would’ve been the iPad Mini 2. The other Android tablets I looked at were either discontinued (the Nexus 7), looked poorly made (a lot of the super-cheap tablets on sale for Black Friday), or were the same price as the iPad (the Nexus 9, etc.).

The Galaxy is an 8.4-inch tablet that was originally released earlier in 2014 to compete head-on specs-wise with the iPad Mini 2. While it’s since been replaced by an even newer model (the Galaxy Tab S line, at 7 and 10.1 inch sizes), the Tab Pro 8.4 is still sold in stores as a cheaper option, and was particularly popular on Black Friday/Cyber Monday. The store I bought it from had to order it, as it was sold out.

The tablet’s more plastic than the iPad line, but feels durable and well made. The 8.4 inch screen and high resolution (2560×1600) makes reading comics enjoyable. The processor also ensures it’s not sluggish, even with Samsung’s skinned TouchWiz interface (more on that below). While my tablet usage tends to be for things that don’t stress it (I infrequently play games), its specs are a lot stronger than my old Nexus 7. There’s also a microSD card, supporting up to an extra 64GB of space above the 16GB default.

Overall, I’m pleased with the tablet so far. My only concern would be for how long between and how frequent Samsung will provide updates.

Saying "Shazam" will finally do something in real life (on Android)
Can Chrome (and a Chromebook) fill in for my usual computing tasks?
Google's 2016 year in search: from Pokemon Go to politics
10 years with Linux, and how my usage has changed
Share this post