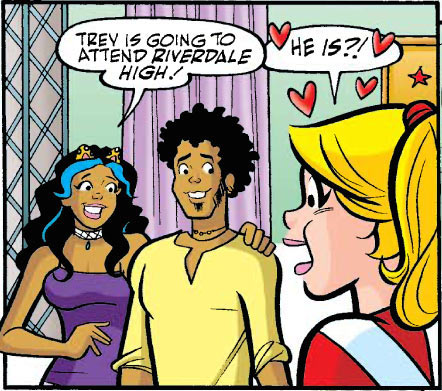 This week’s minorities in cartoons entry is Trev Smith of Archie Comics. Trev (short for “Trevor”) first appeared in “Archie” #631 (May 2012). He was created by artist/writer Dan Parent.

Some versions give Trev’s name as “Trev Brown.” However, I’m going with “Smith” for this post, as that’s what Archie’s website officially lists.

Trev was introduced as the younger brother of Valerie of “Josie and the Pussycats” fame. (His introductory story implies the Pussycats are college aged, though under 21.) Still in high school, Trev begins attending Riverdale High when the Smith family permanently moves to Riverdale. Veronica and Betty both take a liking to Trev. However, Trev is just interested in dating Betty.

The story that introduced Trev led into an alternate-future storyline about Archie marrying Valerie. It shows Archie leaving his rock group to be with Valerie, which leads to Trev joining as a replacement. Trev and Betty get married by the end of the story.

Since the above story, Trev’s occasionally appeared in other stories. He’s usually either a background/secondary character, or as someone for Betty to go out with as an alternative to dating Archie. Trev also tends to appear on covers or promotional Archie artwork fairly often. Adam Chisholm, a character introduced in the early 2000s as Betty’s main alternative choice to dating Archie, seems to not appear as often as he once did.

Trev appears in the live-action series “Riverdale,” which debuted on the CW in 2017. Actor Adian Bradley plays Trev. Trev and Valerie’s last names are “Brown” in this series.