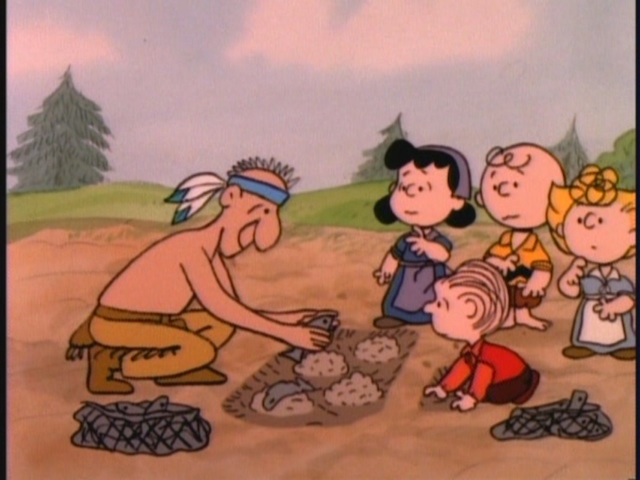 As an addition to my previous series of animated Thanksgiving special posts, I thought I’d add this one for various minor specials that don’t seem to justify stand-alone blog posts. As noted before, Thanksgiving doesn’t seem that popular a holiday to make specials for.

Most of these specials have gone unaired on TV for years. However, some are available on home video.

BC: The First Thanksgiving

This was a 1973 TV special based on the long-running newspaper comic strip “B.C.,” about the antics of anachronistically-modern cavemen (but not quite at the Flintstones’ 20th century-style suburban living). Gags about dinosaurs, ants, prehistoric birds, and bad puns are the strip’s trade. However, it nose-dived in quality toward the end of creator and original cartoonist Johnny Hart’s run. Not helping is that Hart’s evangelical religious views started to dominate the strip.

In this special, character “the Fat Broad” (yeah, I know) sends the guys out to capture a turkey for flavor for her rock soup. Only problem is, nobody knows what a turkey looks like, save the turkey himself. They eventually find one, however, and spend the rest of the special trying to catch it.

The special’s not aired on TV in years, probably because it wasn’t very good or popular. The “B.C.” characters did go on to appear in a later Christmas special. Even more anachronistic, I know, but if the Flintstones could do it…

The special was released to VHS and even laserdisc, but not DVD.

The Mouse on the Mayflower

“The Mouse on the Mayflower” is just that, a 1968 Rankin-Bass traditionally animated special about a mouse voyager on the “Mayflower.” He interacts with the Pilgrims on their trip to North America, and participates in the first Thanksgiving.

The special’s been unseen on TV for years, but was released to VHS. There’s still no DVD release, however.

This 1980 animated special features Dorothy returning to Oz. There, she has further adventures with characters from the original Oz books by L. Frank Baum. The Thanksgiving references in this one seemed fairly superficial.

1950s TV entertainer Sid Caesar appears in this special as the voice of the Wizard. The special itself was apparently later edited to remove its Thanksgiving references, and re-released under the title “Dorothy in the Land of Oz.”

The special’s probably not been anywhere on TV since the early 1980s. Since then, it’s been released to VHS. In 2007, “Oz” was also released to DVD under its “Dorothy” name/version, as a double feature with the 1983 Easter special “Peter and the Magic Egg.” That one was based on the PAAS Easter egg-dye kit, of all things.

This is America, Charlie Brown: The Mayflower Voyagers

“This is America, Charlie Brown” was a “Peanuts” miniseries in the late 1980s. The miniseries covered various historical American moments, all with members of the Peanuts gang “involved.”

This installment explained the voyage of the Pilgrims to Massachusetts, plus their involvement with the Native Americans.

The entire “This is America” series is on its own DVD set. It also still airs on ABC each year in an edited form, as the companion to “A Charlie Brown Thanksgiving.” This hour-long airing lets the Thanksgiving special air (largely) uncut.

A Winnie the Pooh Thanksgiving

This 1998 special features the Hundred Acre Wood gang preparing for a Thanksgiving. Rabbit keeps putting on to make the meal “special.”

The special doesn’t seem to air much on TV anymore. However, it was released to the “Seasons of Giving” VHS (and later DVD). 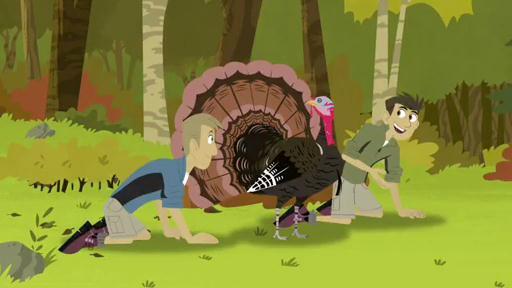 The “Wild Kratts” episode “Happy Turkey Day” takes place on Thanksgiving. It features the gang learning about the nature of wild turkeys and trying out “wild turkey powers.” They also thwart the efforts of one of their villains, Gourmand (a chef who cooks using exotic, endangered animals). Gourmand wants to make a meal of out wild turkeys.

Interestingly, the show doesn’t try to push a vegetarian message, despite its focus on animals. Jimmy at least is seen eating meat in various episodes, per his heavy appetite. At one point, Chris suggests to Gourmand that he instead go buy a free-range, organic turkey raised by a local farm. Gourmand, of course, rejects that suggestion: “I’d rather have Zach’s arm strength than eat a farm turkey!” (Zach being a fellow—and lanky—villain in the series.)

The 10 most influential TV cartoons
Package shows: "Fred Flintstone and Friends"
The 2018 Oscar animation nominees
How are the Disney live-action remakes faring versus the original films?