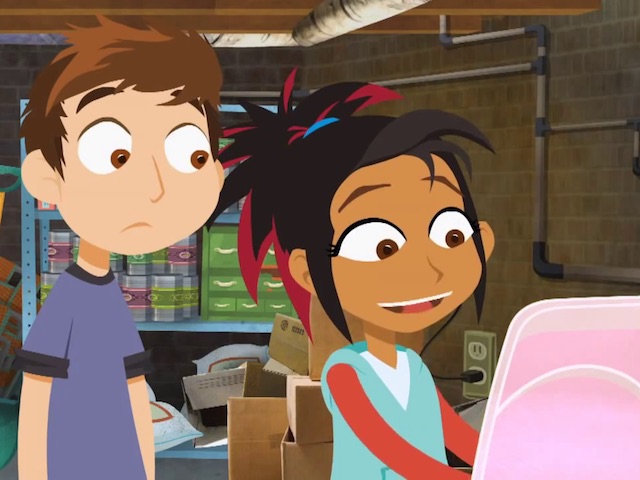 This week’s minorities in cartoons entry is the educational series “SciGirls.” Debuting in 2010, the series airs on PBS, and has had two seasons to date.

“SciGirls“‘s goal is to promote STEM (science, technology, engineering, and math) fields to preteen girls. As such, the show features both live-action and animated portions. The animated portions are wraparound segments at the beginning and end of each episode.

The animated portion’s stars are Izzie, a friendly preteen girl who likes science, and her best friend Jake, who likes to eat puffed cheese balls and was voted by their middle school class “most likely to embarrass himself on the casting special for ‘American Idol’.”

Each episode starts with Izzie and Jake discovering some problem they need to solve: finding appropriate clothes for a triathlon; how to create an appropriate habitat for Jake’s pet mouse (after Jake modifying a dollhouse didn’t work); how Izzie can get people to join her after-school club (after its initial name and theme, the “Gigabyte Techbots,” fails to attract a single member); and so forth.

After being stymied for an answer, Izzie turns to the SciGirls online for a solution. This, however, involves Izzie (through unexplained means) being able to teleport into her laptop (in later episodes, into her tablet or smartphone) to the (real-world) “SciGirls” website. There, Izzie finds an appropriate video that helps solves her problem.

The video, of course, is the live-action portion of the show. A different group of real life “SciGirls,” preteen or teenage girls of various backgrounds, are featured in each episode. Each episode shows how the real-life SciGirls use STEM concepts to perform various tasks, ranging from exploring dolphin behavior to creating clothes with embedded tech gadgets to writing their own apps. The show also works with various real-life groups that try to encourage science and math among girls, especially those from minority backgrounds.

Lara Jill Miller voices Izzie. Miller’s known for her role as “Sam” on the 1980s sitcom “Gimme a Break!”

Greg Cipes voices Jake. Cipes does voice and live-action acting. His most famous role’s as the voice of Beast Boy on Cartoon Network’s “Teen Titans.”

Cartoons at the box office: "Furious 7" now fifth top-grossing film of all time
Minorities in cartoons: "Class of the Titans"
"DuckTales" is being revived for Disney XD in 2017
So long "Disney Vault"? Disney's streaming service to include its animated feature films
Share this post