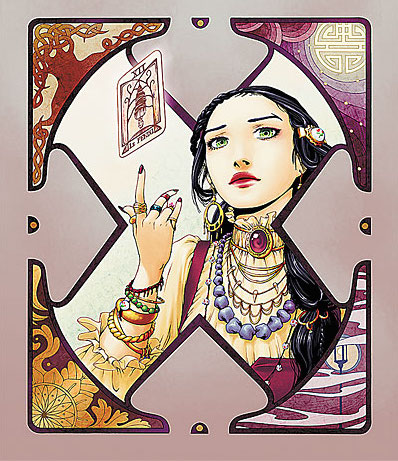 A mystic, Madame Xanadu is sensitive to supernatural phenomena. She often uses tarot cards to interpret what she senses, including forecasting the future. She also has some limited magical abilities.

“Doorway” was a short-lived horror/supernatural anthology series. Madame Xanadu was the book’s recurring host, and occasional story participant. “Doorway” fell victim to the “DC Implosion” of 1978, a mass cancellation of various books. A 1981 one-shot was published, containing the remaining stories from Xanadu’s now-cancelled book. She also made cameos in various other characters’ books (Wonder Woman, Superman, etc.) during the early to mid 80s.

In the late 80s, Madame Xanadu became a supporting character in the Spectre’s own series; she also gained her own Vertigo series in the 2000s. Both expanded upon her backstory.

To summarize her backstory: Madame Xanadu was originally named “Nimue Inwudu,” an immortal sorceress who once cast a spell over Merlin. Merlin, in retaliation, stripped her of her magic, leaving her relying on other means to keep her immortality. (She eventually won a permanent reprieve from death by beating, well, Death in a game of cards.) Eventually gaining the name “Madame Xanadu,” she decided to user her abilities to help advise various historical leaders.

Madame Xanadu eventually opens a fortune-telling parlor in New York City’s Greenwich Village, where she offers her services to those in need. Said shop also contains various magical/mystical artifacts, including some malevolent entities imprisoned in jars. She rarely makes use of these magical artifacts, however, preferring to merely keep them in storage in her shop.

Madame Xanadu’s also worked with or encountered other supernatural beings in the DC Universe, including a short-lived relationship with Zatara (Zatanna’s father) in the 1940s. She also holds a dislike of the Phantom Stranger, though has worked with the Stranger on various occasions. A 2000s Spectre-related crossover storyline saw her blinded for a period of time.

She’s apparently made it into the New 52, somewhat unscathed (as far as I can tell) and with her eyesight back.

A flashback in her own series reveals Xanadu once had a relationship with another woman during the time of the Spanish Inquisition. The website Gay League covers the details of what happened.