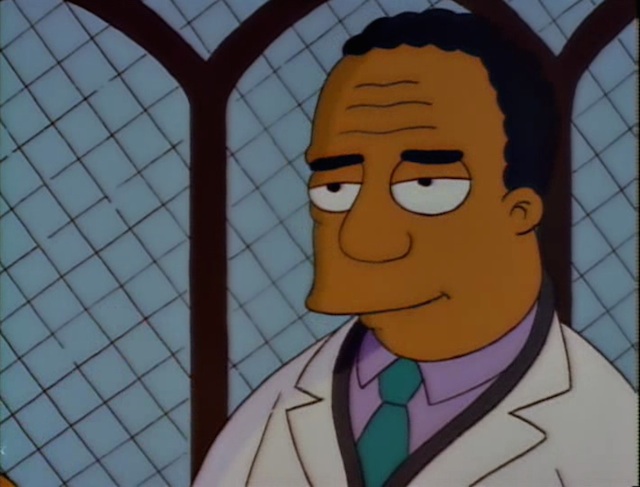 This week’s minorities in cartoons entry is Dr. Julius Hibbert, a supporting character on “The Simpsons.” Dr. Hibbert first appeared in the second season episode “Bart the Daredevil,” and is voiced by Harry Shearer.

Dr. Hibbert’s a loose parody of Bill Cosby’s character from “The Cosby Show,” Dr. Huxtable. As such, Dr. Hibbert’s good natured, though prone to chuckling at odd times (and about almost anything). Being the Simpsons’ family’s doctor, he’s delivered all three of Marge’s children, as well as overseen their various medical emergencies, ranging from Bart injuring himself on a skateboard (in his first appearance) to dealing with Homer’s heart attack. On one of the show’s sporadic serious notes, Dr. Hibbert’s also the one who announced that Maude Flanders was dead.

Unlike most of Springfield, Dr. Hibbert’s actually competent at his job and one of the town’s few intelligent individuals (he has an IQ of 155). He’s also a graduate of John Hopkins. This is as opposed to the other doctor shown in the series, the inept, infomercial-starring Dr. Nick.

Dr. Hibbert has at least two brothers (all apparently unknown to each other), Bleeding Gums Murphy (the jazz musician) and the unnamed manager of the Shelbyville Orphanage. The more dominant running gag, however, is that Dr. Hibbert is shown with various African-American hairstyles in flashbacks: an Afro in 1980, a flattop in the mid-90s, etc.

Dr. Hibbert’s also starred in the various Simpsons Halloween specials. “Treehouse of Horror VII” has him discuss his knowledge about Bart’s evil twin (locked away by Homer and Marge).

Outside of the television series, Dr. Hibbert’s also appeared in the various “Simpsons” media, including the Bongo Comics line.

The 2015 Oscar animation nominees, plus the least diverse Oscars in 20 years
Why is Scooby-Doo still popular after 50 years?
What were the main influences and trends in 2000s TV animation?
Minorities in cartoons: Karolina Dean
Share this post