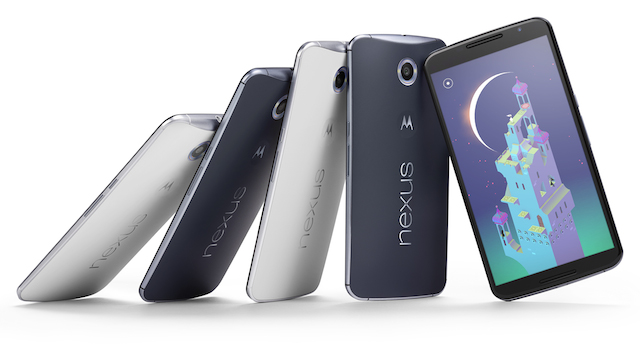 Today, Google announced (a day ahead of Apple’s own big new product news) several new products, as well as the newest version of Android, “Lollipop.” There’d been much debate over what the new Android OS name would be, including “licorice” or another licensed product (a la KitKat). Of course, now there’ll probably be various jokes about how “Lollipop sucks” or somesuch.

Anyway, the new Nexus devices include:

The Nexus 6 is Google’s newest plain-Android smartphone, produced by Motorola. Unlike the previous few generations, including the Nexus 4 (which I own) and the Nexus 5, the 6 is a “phablet” that has a 6-inch screen. On top of that, is the price now being in line with other smartphones—not on contract, the Nexus 6 starts at $649 for the entry-level model (32GB; there’s also a 64GB model).

While it offers plenty of improvements over the Nexus 5 specs-wise, if the size doesn’t turn most potential customers off, the price will. Google does plan to still offer the Nexus 5 for sale as an entry-level model, though I didn’t hear about any upgrades to its specs. Although my Nexus 4 is just fine now, I’ll probably want a new phone next year. Though I gather my choice will be between an aging Nexus 5 off-contract or a new phone model on-contract; the most appealing-sounding non-Nexus models I’ve read about or seen: the Moto X (with stock Android), Galaxy S5, and the iPhone 6.

The Nexus 9 is the newest Android tablet backed by Google (but produced by HTC). The 8.9″ tablet will start at $399 for the entry-level 16GB WiFi model.

While it’s a welcome set of upgrades from the now-dead Nexus 10 (and my first-generation Nexus 7), at $400 I’d probably just buy an iPad instead. Unfortunately, the popular Nexus 7 tablet’s been discontinued, so if I want a new cheap Android tablet, I’ll have to look elsewhere. Given my tablet’s getting a bit long in the tooth (and its screen-rotate feature’s been acting up lately—software related?), it’s likely I will be replacing it over the next year. With what, however, I don’t know.

I’m not interested in a Kindle, but I think the death of the Nexus 7 will see a big shift in sales to Amazon’s tablet.

The Nexus Player is Google’s newest entry in the set-top device market. At $99, it offers similar functionality to its popular $35 Chromecast device, but also supports a few other features such as game playing (with an optional $40 controller). Engadget compares it to Amazon’s Fire TV device.

Google’s been trying to break into the set-top device market for years, and this is their latest effort. It’ll find stiff competition between the aforementioned Fire, longtime players Apple TV and Roku, and most of all, Google’s own Chromecast device.

Given the choice, I’d be more interested in the Chromecast than the Nexus Player, as it’s cheaper. Of course, I also would need more than two HDMI plugs on my TV set, both of which are currently taken (one by the cable box, the other by my Xbox 360).

The newest version of Android, “Lollipop,” will run on all recent versions of Nexus, including the Nexus 4 and first-generation Nexus 7.

Overall, Google seems to want to show its devices are just as capable of going head-to-head with popular higher-priced phones and tablets. However, I wonder if this tactic will backfire; reaction online from tech enthusiasts to the Nexus 6 and 9 so far seem mixed. As for the general non-techie public, I’m not sure the Nexus 6 will draw them away from more popular Android phones… and the Nexus 9 definitely won’t draw them away from the iPad.

Google's 2015 year in review
Thoughts on the Samsung Galaxy Tab Pro 8.4
Smart speakers' most popular uses are for music and information, not shopping
Google+ Photos now available through Google Drive