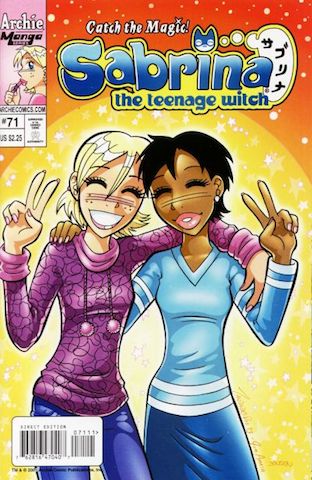 Llandra first appeared as a fellow student and witch at the magical “charm school” Sabrina attends. Several issues after this point, the “Sabrina” comic assumed a manga style and extended storyline, which it kept for the remainder of its run.

Llandra is shown as Sabrina’s best friend. Similar to Sabrina, Llandra also lives in the fictional town of Greendale, but attends a different mortal high school from Sabrina’s. Llandra’s family comes from Brazil, where her father was a respected rainforest shaman.

During the manga series’ run, Llandra is seen for a time dating Shinji, a fellow charm school studen. However, the two eventually break up. Later in the series, Llandra begins dating Narayan, a teenaged merman (or merboy, I suppose).

Llandra also helps the others in resurrecting the now-banned “Four Blades” movement in the Magic Realm. She also helped investigate the Realm’s problems with magic.

Llandra hasn’t been seen since the “Sabrina” manga series ended its run with issue #100 in 2009.