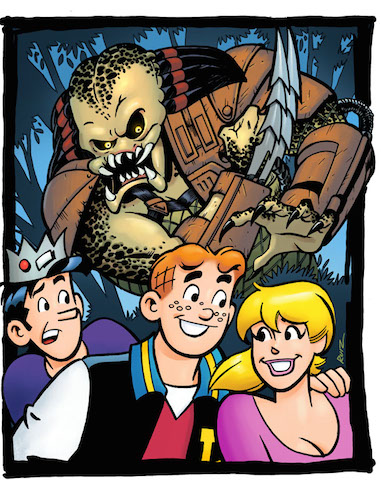 Yes, another crazy-sounding storyline is coming from Archie Comics. From the people that brought us “Archie Meets the Punisher,” “Archie Meets KISS,” and “Afterlife With Archie” comes… “Archie Meets Predator.” From the press release:

Archie and friends hit Costa Rica for spring break, where party and beach games soon get replaced by the most dangerous game! What mysterious attraction does the gang hold for the trophy-collecting Predator, and will the kids even realize they’re in danger before it claims them all?

The four-issue miniseries is due out in 2015. More on The Mary Sue.

I vaguely recall seeing the original “Predator” film ages ago, but not its various sequels, comic spinoffs, etc. Still, this crossover sounds quite goofy. I wonder if it’ll replace my favorite Predator comics reference, from “My Cage”: two characters’ romantic relationship is described as “they’re barely ‘Alien versus Predator” (in rebuttal to the idea that they’re “When Hairy Met Sally”).

I also wonder how Archie’s business is doing. They’re really cranking out the crossovers, “mature readers” books, and the usual licensed books. However, their regular single-issue comics are down to just “Archie” and “Betty and Veronica,” and only the former’s a monthly title. Their more popular digest line still has six separate books, however; there’s also a quarterly magazine released around holidays. Additionally, “Sabrina: Secrets of a Teenage Witch” is still on TV.