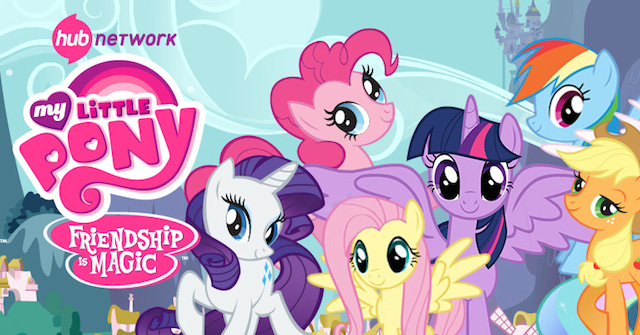 After four years, the cable TV network The Hub is changing its name to “Discovery Family.” The move comes as Discovery Channel, which until now owned half of The Hub (Hasbro owning the other half) assumes the majority controlling interest in the channel, admist its ratings difficulties (and the departure of The Hub’s president a few months ago). The new Discovery Family lineup will have Hasbro control its schedule between 9 AM and 3 PM (presumably ET), with Discovery programming family-oriented entertainment during the remainder of the schedule. . (Update 9/25/14) The network will switch identities to Discovery Family on October 13. More details (what few there are) are available in this “Variety” article.

This seems to mark a semi-return to the channel’s previous identity. The channel was originally known as “Discovery Kids” until 2010, when a joint venture between the Discovery Channel and Hasbro saw it become “The Hub.” The Hub saw some moderate success with “My Little Pony: Friendship is Magic,” and brought 90s Warner Bros. cartoons like “Animaniacs” and “Tiny Toon Adventures” back to TV for the first time in years.

Unfortunately, this doesn’t seem to be enough to avert mediocre ratings versus its competitors Cartoon Network, Nickelodeon, and the Disney Channel, or even compared to their secondary channels (NickToons, Disney XD and Boomerang). NickandMore.com notes that compared to an average of 1 million+ viewers a day for the big networks, The Hub barely gets a tenth of that.

There’s no indication what Discovery Family plans to air. While I don’t expect “Kenny the Shark” to return, I wouldn’t be surprised if the 90s Warner Bros. cartoons got the heave-ho in the reprogramming. I do assume “My Little Pony,” as one of The Hub’s few success stories, will stay on the schedule.