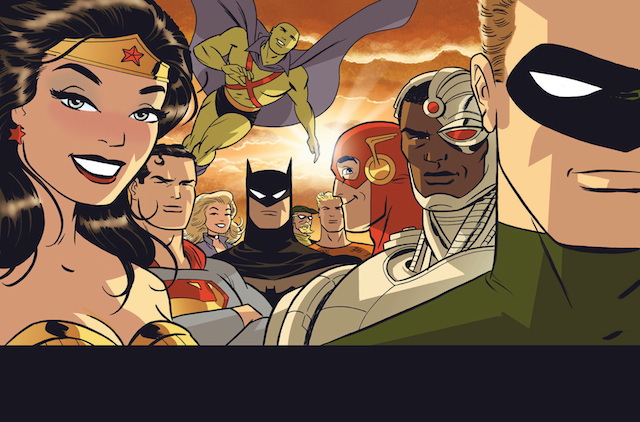 Here’s a look at what’s coming out from DC Comics for December. A list of full solicitations are available here.

This month’s variable covers are by Darwyn Cooke (of “New Frontier” fame), and seem to be the polar opposite in tone and style from the regular New 52 material. The characters are all in their traditional costumes, and enjoying each other’s company. (Versus some modern versions’ adolescent “uneasy allies at best” thing that sounds like 5-year-olds fighting in the back seat of a long family car trip.) The only New 52 concessions seem to be for “Justice League United,” “Harley Quinn,” and “Superman/Wonder Woman”: New 52 versions of the costumes for the first two, and the last one showing the two being, well, affectionate.

Speaking of which, I hope that “Sensation” cover’s interior shows Clark and Diana as being “just friends.” I gather I’ll have to be asking this from now on whenever non-New 52 versions of Clark and Diana are shown together…

“Multiversity” this month features the Marvel Family of “Earth-5,” which seems to be in a much more traditional tone (lighter and fun) than Billy’s New 52 version. We’ll even get to see Sivana’s children… his bad two, I assume, who’re named Georgia and Thaddeus Sivana Jr. (the “World’s Wickedest Girl/Boy” and enemies of Mary Marvel/Capt. Marvel Jr. respectively). Speaking of names, the solicitation calls him “Captain Marvel” and not “Shazam,” as others on Twitter are pointing out. Does Morrison have that much pull to avoid the editorial mandate? A typo?