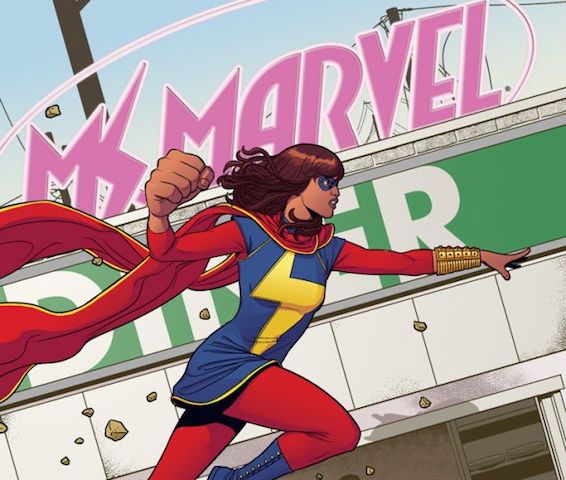 Kamala’s backstory states she’s the daughter of Pakistani immigrants who moved to Jersey City, New Jersey. Kamala grew up respectful of her Muslim background, but also wanted to fit in with her peers. She’s also a huge fan of Carol Danvers, the former Ms. Marvel who’d recently changed her name to Captain Marvel (no relation to the DC Comics hero now going by “Shazam”).

One night, Kamala snuck out (against her parents’ wishes) to attend a party with friends. However, she soon left the party, after growing disillusioned and being teased by a few others. Suddenly, the “Terrigan Mists” enveloped Kamala. The Mist is a special mutagenic gas that was released over the entire Earth, as part of a Marvel storyline involving the Inhumans.

Kamala emerged from the Mists’ exposure discovering she had Inhuman heritage. She’d gained the ability to shape-shift in various ways. Initially, she unconsciously shifted her appearance to resemble her heroine Carol Danvers.

After some initial clumsy usage of her powers to save others, Kamala started training to hone her abilities. She also took up her own appearance and costume, plus Danvers’ now-unused former name “Ms. Marvel.” As Ms. Marvel, Kamala vows to defend Jersey City from various threats.

Ms. Marvel is (far as I can find) the first Muslim character from a major American comic book company to headline their own comic. Her debut’s part of Marvel’s attempt at increasing diversity among its comic characters. So far, Kamala’s received a lot of praise.

As noted above, Ms. Marvel’s powers consist of various shape-shifting and shape-altering abilities, including turning her fists into giant hammer-like weapons, growing and shrinking in size, and altering her appearance. She also has a healing factor.