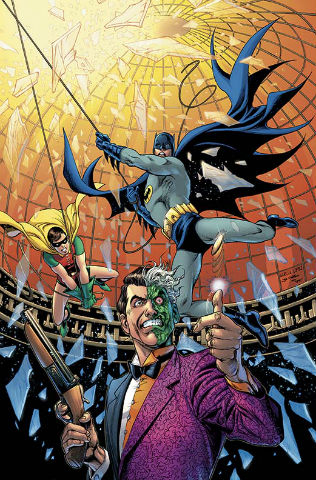 Here’s what’s of interest coming out from DC Comics for November. Full solicitations are available here.

Quite a bit this month…

“Multiversity” features an Earth for the Charlton Comics characters this month—the company’s characters on which “Watchmen” was loosely based on.

“Batman ’66: The Lost Episode” is the introduction of Two-Face into the Batman ’66 universe. The Harlan Ellison-written script was originally meant to be an episode of the original series, but was scrapped before filming, and never used. This one-shot issue’s adaption is being done by classic Batman writer Len Wein and artists Jose Luis Garcia-Lopez and Joe Prado.

On the digital-first side of things, Etta Candy appears in this month’s “Sensation Comics.” Also, the Scooby-Doo gang team up with… the Flintstones?! While I see they’re open to using the Hanna-Barbera stable of characters (not just DCU superheroes), I’d expect them to meet the other H-B heroes, such as Jonny Quest, Blue Falcon, or Birdman. That said, “Velma Dinkley’s likely reaction to Stone Age technology/rock puns” alone makes this a must-buy for me…

The 1960s Japanese Batman manga series is being reprinted in three book volumes. 2015 brings the 75th anniversary of the Flash, and with that, comes a special hardcover reprint of Flash stories. Finally, this month’s “Showcase” features a fifth volume of the Legion of Super-Heroes.