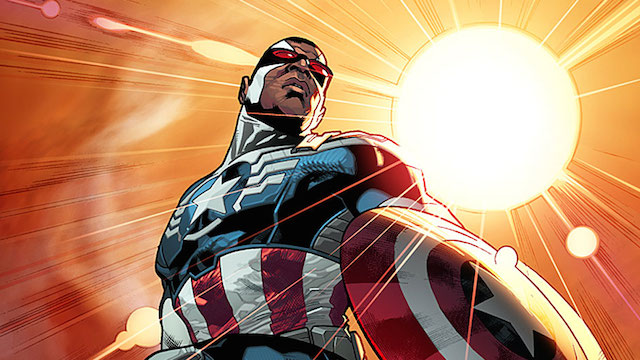 Much has been written about this by everyone else over the past week, but I guess I’m obligated to chime in as well. Marvel’s announced plans to replace Captain America and Thor. For Thor, a woman will be assuming the role of the Mighty One after Mjolnir (Thor’s hammer) rejects him as being “unworthy” of the role. For Captain America, Steve Rogers is forced to retire after his Super Soldier Serum’s somehow removed, causing him to age into an elderly man. Cap’s replacement: the Falcon (aka Sam Wilson), his longtime crime-fighting partner and best friend. In addition, Marvel’s just announced at San Diego Comic-Con that Sam will be getting a second title, in the form of leading the Mighty Avengers in their renumbered comic this fall, “Captain America & the Mighty Avengers.”

My two cents: I’ll agree that it’s another gimmick, as we’ve seen heroes “replaced” plenty of times before, and I assume Cap at least will be Steve Rogers again in time for/not long after next year’s “Avengers 2” movie at a minimum. (Or at least, expect a lot of “flashback” stories and reprints of Steve-Cap’s adventures.) There’s also something to be said for creating new comics featuring the Falcon and one of the women in the Thor mythos in their traditional identities.

On the other hand, it’s hard for books featuring secondary or brand-new characters to catch on, as a lot of fans either don’t have money to try something new (given comics run $4 a pop) or refuse to try anything new. There’s also issues with under-representation of minorities as A-listers, and a traditional lack of diversity among the very biggest superhero names. DC opted to promote Cyborg into being a founding JLAer in the New 52 reboot, but otherwise, all the Justice Leaguers stayed Caucasian. DC’s allowed some less-than-A-listers to become minorities, but how they’ve been handled leaves a lot to be desired in my opinion. For instance, Alan Scott in the New 52’s now gay, but they killed his boyfriend in the second issue. The New 52 Wally West (who was an A-lister as the Flash between the mid-80s and several years ago) is Black, but he was introduced as having run-ins with the law. Wally’s shown being arrested for vandalism in his first appearance, and arrested again for shoplifting in his most recent appearance. This strikes me as completely tone-deaf and clueless on DC’s part. Meanwhile, Marvel’s had success with introducing more and more minority characters and women in their own books (Ms. Marvel, Captain Marvel, Miles Morales), but seems to have decided to take the path of replacing mainstream Marvel Universe Caucasian A-listers—at least temporarily—with minorities and women.

Of course, there’ll be those whining about how Marvel is “being PC,” but they’re probably the same people who got hot under the collar about Miles Morales, Kevin Keller, and—years ago—John Stewart as the animated “Justice League”‘s Green Lantern. The latter had the same complaints I see now (“being PC,” “he’s not the real GL,” “gimmick,” etc.), but John went on to become one  of the most popular characters on the show, proving the naysayers wrong. More recently, Nick Fury‘s Ultimate universe version, a Black man, has become the main go-to version of Fury in non-comics media. Marvel’s even introduced a lookalike version of the African-American Nick Fury into mainstream continuity as the until-now-unknown son of the Caucasian Nick Fury.

Even if Marvel’s changes prove temporary, I suppose there’s hope it might open the room to a more permanent change down the road for an A-lister, assuming the country’s changing demographics don’t force such changes even sooner. That or, of course, these characters finally entering the public domain as many of them should’ve years ago under less insane and corporately biased/bought off copyright laws, but that’s a whole other blog post.