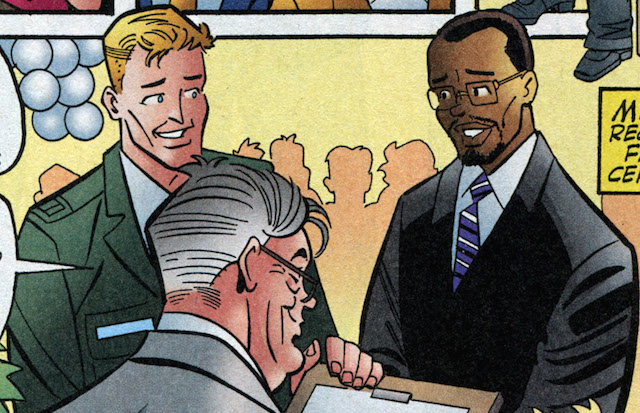 This week’s minorities in cartoons entry is Clay Walker, a character in Archie Comics. Clay first appeared in “Life With Archie” #16 (February 2012). He was created by Paul Kupperberg, Fernando Ruiz, and Pat and Tim Kennedy.

(SPOILERS aplenty about the “Life With Archie” series below…)

Clay exists in Archie’s “Life With Archie” series, which has just concluded as of this writing. The series presented the Archie gang as twentysomethings. Each issue featured two different alternate futures: one in which Archie married Betty, another where Archie married Veronica. Both futures had similar events.

For instance, both futures saw Moose finally dumped by Midge due to his violent temper, which was apparently part of what it took for him to finally clean up his act. Jughead also ended up owning the Chocklit Shoppe in both futures. Differences included the aforementioned Moose becoming Mayor of Riverdale in the “Veronica” future, and Jughead marrying Midge in the “Betty” future. (If curious, the “Veronica” future sees Jughead marry his longtime admirer, “Big” Ethel Muggs.)

Fortunately, Clay exists in both futures, and leads the same life in both. Clay is a physical therapist and native of Baltimore who helps the adult Kevin Keller recover from injuries sustained during an unnamed Asian/middle eastern war (no, probably not the same “generic Asian conflict” Rhodey was in). During the recovery, the two grew close and eventually fell in love.

After Kevin recovered, the two decided to get married. The Chocklit Shoppe held the wedding, with Riverdale’s mayor officiating. Clay was also supportive of Kevin’s run for the US Senate, while making his own career change. He replaced a retiring doctor, and took over his clinic.

Clay also fell victim to violence himself, as he was shot while trying to intervene in a convenience store robbery. Fortunately, he managed to recover. Later, Clay found a new client at his clinic (and worker at the Chocklit Shoppe) that started to follow him around for some reason…which turned out to be the shooter at a recent mall shooting in a neighboring town. Unfortunately, while Clay and Kevin were saved from further gun violence (when the shooter emerged at fundraiser for Kevin), Archie wasn’t so lucky.

Clay appeared in a freemium Archie game as an additional character available as downloadable content. Otherwise, he’s yet to appear in other media, or in the regular Archie comics.