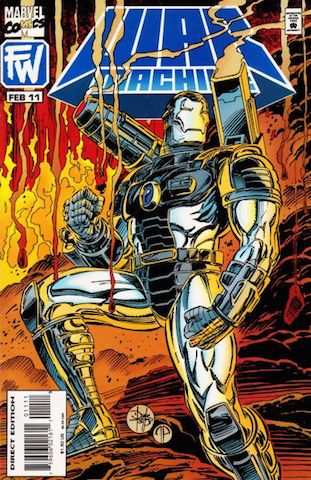 Rhodey’s backstory states he served in the military as a Marine on tours of duty in southeast Asia. He was originally involved in the Vietnam War. However, floating comic timelines have retconned the war into a “generic Asia-based conflict” (as shown in the movies).

Anyway, Rhodey’s helicopter was shot down by enemy forces. While grounded, Rhodey encountered Tony Stark (fleeing in his prototype armor from his captors). Rhodey and Tony teamed up to fight their way through the various war threats and got back to safe territory. Afterwards, Tony offered Rhodey a job as his own personal pilot, which (after several other post-war jobs), Rhodey accepted.

Rhodey for a time assumed the role of Iron Man, during an early 80s storyline that saw Tony temporarily incapacitated (due to alcoholism) from both running his own company (due to a hostile takeover) and functioning as Iron Man. Rhodey fought against various Iron Man foes, and took part in the classic crossover “Secret Wars.” Eventually, Tony regained control over his personal life and business career and resumed functioning as Iron Man. However, Rhodey would substitute for him on several other occasions.

In the early 90s, Tony was suffering from a nervous system failure. He turned over control of the company to Rhodey, along with a new experimental suit of armor nicknamed “the War Machine.” Rhodey took over Stark’s company and became Iron Man again, but discovered that Tony was alive and secretly undergoing an experimental life-saving procedure.

Insulted that he was led to believe Tony was dead, Rhodey’s friendship with Tony became strained. Rhodey ended up quitting, but kept the War Machine armor. The two eventually made amends, and Rhodey continued to have various adventures on his own (and in his own ongoing comic series) as War Machine. A 2013 storyline found Rhodey leaving the War Machine identity to take on a new armored identity, “Iron Patriot.”

War Machine’s appeared in nearly all Iron Man-related media to date. His most high profile media appearances would be in the “Iron Man” trilogy of films. Terrence Howard played Rhodey in the first film; Don Cheadle played him in the next two films.

Despite a lot of online speculation as to the change, it turned out Howard was replaced by Cheadle merely due to a contract dispute.