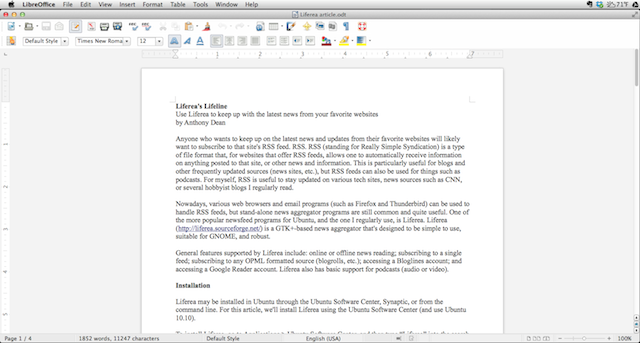 Like everyone else, I’ve used Microsoft Office at jobs for years, as the ubiquitous and dominant word processor in the business world. However, it can’t hurt to look at alternatives to Microsoft’s software, especially if they’re free. Thus, here’s a look at two of the most popular free office suites nowadays, LibreOffice and Google Docs (also known as Google Drive).

LibreOffice is a free open-source office suite that was forked several years ago from OpenOffice, which while popular had grown stagnant and complex in development and updates. After being forked, LibreOffice has gone on to see frequent updates, as well as become the dominant office suite included with many Linux distributions.

Components of LibreOffice include Writer (the word processor), Calc (the spreadsheet), and Impress (a presentation program). While some might not like LibreOffice’s menus and toolbars resembling Word 2003-era office suites, I can’t stand the “Ribbon” in modern versions of Microsoft Office, so LibreOffice’s interface is fine with me.

LibreOffice supports the OpenDocument (.odf) format, an open format for documents. It also supports importing and exporting Word, Excel, and PowerPoint formats. While I store my files as .odf format, I also keep copies of a few documents (my resume particularly) in Microsoft Office’s .doc/.docx formats.

I’ve been using LibreOffice (and its OpenOffice predecessor) as my usual office suite of choice for years. Besides being free, it also lets me read, edit, and export Office formats easily. I’ve written articles using Writer, and used Calc for setting up a spreadsheet to manage my personal finances. Those needing particularly complex spreadsheet functions like Excel’s macros might be better off with Excel. However, for general and some advanced spreadsheet functionality, Calc should work fine.

Google’s been making efforts at promoting its cloud services, including its own office software suite, Google Docs. The software is included with and accessed through Google Drive accounts (Google’s online storage service). It’s also the default office software on Chromebooks.

While Google oddly and confusingly has buried the Docs name under Drive, it has given individual names for its components. The names are more prominently called such on Chrome OS/Chromebooks: Docs (the word processor), Sheets (the spreadsheet), and Slides (the slide presentation program).

Google Docs’ interface is very simplistic and clean. Its word processor in particular reminds me of the old MacWrite word processor, or of ClarisWorks/AppleWorks (Apple’s 90s/2000s predecessors to iWork). Add-ons for extra functionality are available through the “Add-ons” menu, offering services such as a thesaurus and a bibliography creator. A range of fonts is also offered, both conventional fonts (Times New Roman, etc.) and Google’s own fonts.

Docs is geared toward those without demanding needs. Those needing complicated/complex word processing or spreadsheet needs will want to stick with Microsoft Office (or consider LibreOffice).

The one downside I’ve found is Docs feels a bit clunky at importing non-native documents. Opening Word or LibreOffice documents through Docs’ file picker or through Drive results in a read-only file. To actually edit the file requires going into a submenu (File > Open With > Google Docs), which apparently converts it to Docs’ format (and creates a copy of the original file). However, Google very recently upgraded its Android Drive/Docs apps to allow for native editing of Word files, making the above unnecessary for those formats. Google’s site states this change will also eventually be rolled into upgraded versions of Drive on the desktop. There’s no sign of such native editing support coming for LibreOffice documents, however, though Docs will still read from and export to that format (after going through the steps above).

The other downside is probably more specific for me, but opening/importing my LibreOffice files saw some of the fonts reverting to ones I didn’t choose in a few sentences. Easily noticeable and fixable in my two-page resume, but imagine someone with a lengthier document wouldn’t be pleased. Someone on Twitter claimed it might be OS X’s own issues with LibreOffice and fonts, though I’d need that confirmed. Importing Word files (.doc/.docx) saw the documents open just fine, however.

Overall, LibreOffice is my office software and word processor of choice. However, I can see why others will find Google Docs appealing. There’s other word processing software available of course, including OpenOffice and Microsoft Office’s own Docs-like online-based suite.