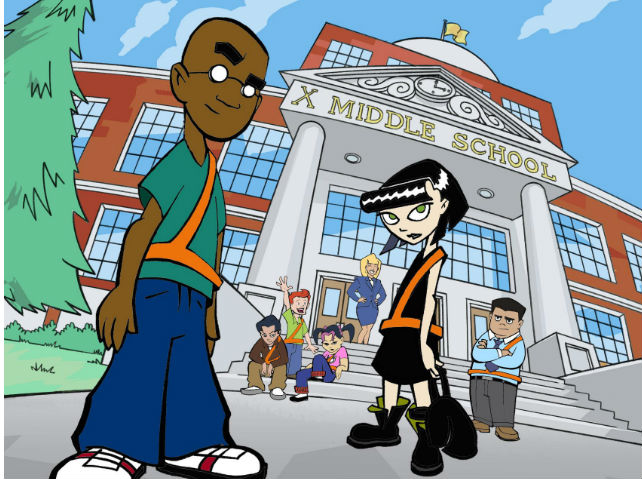 This week’s minorities in cartoons entry is the Saturday morning series “Fillmore!” Airing on ABC from 2002 to 2004, the series was produced by Disney.

The series focused on its titular character Cornelius Fillmore, a bald 12-year-old African-American kid who was once a juvenile delinquent. Caught planning to steal a shipment of chalk from his school (“X Middle School,” supposedly located in the Twin Cities per Wikipedia), the school’s safety patrol gave him a choice: help solve a case or spend the rest of middle school in detention. Fillmore opted to help, and did such a good job that he was given a permanent position as a safety patrol officer.

Later, Fillmore gained (after a few other short-lived partners) Ingrid Third, a goth-like girl who also was a former delinquent. Besides a reserved personality, Ingrid also possesses a photographic memory.

As suggested above, the entire series is a parody of 70s cop TV shows, down to the opening theme song. X Middle School is treated like a “city,” the safety patrol like the police, and the school’s principal like the mayor. As such, the cases all resemble kid-friendly versions of cop shows’ cases: stolen standardized tests; gambling and smuggling involving tokens from snack products (that one redeems for prizes); Fillmore clearing his name; and the obligatory tracking down of fugitives.

Fillmore and Ingrid even answer to the safety patrol’s “junior commissioner” Horatio Vallejo, a Latino fellow middle-school student who behaves like the agitated chiefs of police one sees on cop shows and films. Part of Vallejo’s agitation might stem from Fillmore tending to do whatever it takes to solve a case—even at the occasional accidental expense of school property.

“Fillmore!” ran for two seasons on ABC, as one of the final Disney animated shows (along with “Teamo Supremo“) produced originally for broadcast television, before Disney shifted exclusively to producing animated programs for the Disney Channel. Since then, the show has turned up very sporadically on cable (Toon Disney ran the series for awhile), but otherwise hasn’t been seen on TV in years.

The show’s not on VHS or DVD, keeping with Disney’s poor handling of home video releases for its made-for-TV cartoons. The only home video release it’s received is on Germany’s version of iTunes (dubbed in German).