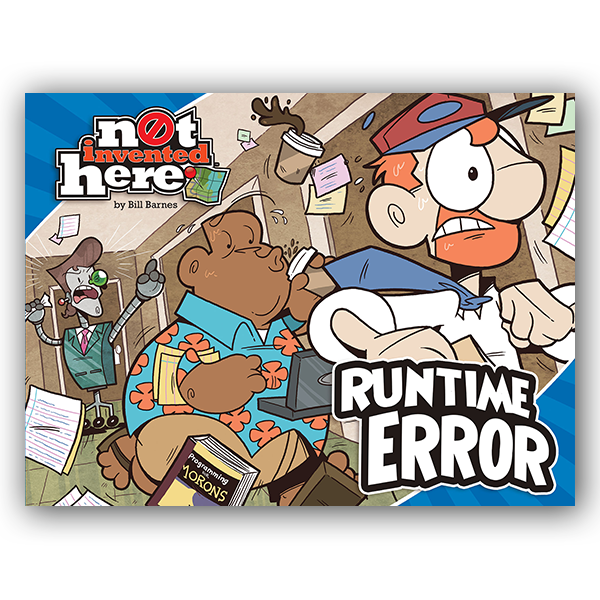 This week’s minorities in cartoons entry is “Not Invented Here,” a webcomic about the staff of a software development company. The webcomic started in 2009, and is created by Bill Barnes, Paul Southworth, and Jeff Zugale.

The strip’s lead characters consist of Owen and Desmond, a program manager and a developer respectively. Owen, a thin Caucasian man with a goatee, is the goofier of the two. However, that’s not by much, seeing as his best friend Desmond (a heavy-set bald African-American man) is also prone to odd behavior, though is the much better programmer.

Typical examples of their antics: Desmond once insisted on using only American-made products, and pressured his coworkers into doing the same, which didn’t go well. Another storyline had Owen somehow get a patent on parentheses.

Similar to “Dilbert” (but more ethnically diverse), the company Owen and Desmond work for is fairly dysfunctional. One of the higher-ups is “Marketroid,” a robot Desmond built in college that was programmed with a marketing executive’s personality and skills.

There’s also Umesh, a coworker who seems to hold most of his coworkers with contempt. He’s often seen making condescending remarks.

Another character is Eliza. She was once a rival coworker of Owen, but now is the company’s vice president of technology. Eliza also has little patience for the more bizarre aspects of her staff.

The strip’s been collected into a few print book (and ebook) collections. It’s also managed to earn its own TV Tropes page.