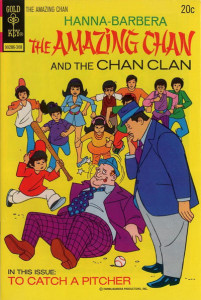 This week’s minorities in cartoons entry is the 1972 Hanna-Barbera series “The Amazing Chan and the Chan Clan.”

The series was loosely based on the Charlie Chan movie series and books. The animated series featured famed detective Charlie Chan and his 10 children of various ages (ranging from teens to grade schoolers), plus their pet dog, solving mysteries.

While Mr. Chan gets top billing, most of the episodes center around his offspring, as they attempted to solve the episode’s mystery. Like “Scooby-Doo” and Hanna-Barbera’s other similar shows, the Chans traveled around in a specialized vehicle. It came with the ability to transform into various other types of vehicles as needed (a taxi cab, a bus, etc.).

Similar to “Josie and the Pussycats,” “Jabberjaw,” etc., the elder Chan children were also part of a music group, “The Chan Clan.”

“The Chan Clan” was apparently a problematic series for Hanna-Barbera… at least from what I’ve read online (Wikipedia, Mark Evanier’s blog, Comics Worth Reading, etc.). The show was produced in the early 70s, during what must’ve been the studio’s nadir animation-quality-wise.

As for what the show was up against competition-wise during its first and only original season:

The show’s original voice cast for the children were Asian actors. However, they were recast after it was deemed their accents were too thick for American viewers. This led to the show casting, among others, then-child actress Jodie Foster. On top of all this was the show’s very large cast (10 kids, a dog, Mr. Chan himself, plus the villains, etc.).

Besides Ms. Foster, the other noteworthy voice actor for the show is for Mr. Chan himself, Keye Luke, who played Charlie’s “Number One Son” in the original theatrical film series. This show marked the first (and apparently, only) time someone of Asian descent has played Charlie Chan. (Keeping with the era’s stereotypes/problems, the theatrical films cast a Caucasian actor to play Charlie Chan.)

In spite of the above, “Chan Clan” might be the first American animated TV series to star characters of Asian descent that weren’t stereotypical.

The Chan Clan appeared on Adult Swim’s “Harvey Birdman” as a Japanese singing group. (The writers ignored or forgot they’re of Chinese descent, not Japanese.) They sue Jabberjaw’s group, the Neptunes, for plagiarism.