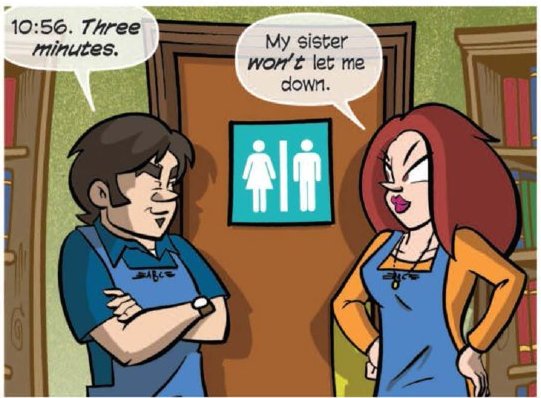 This week’s minorities in cartoons entry is Jason, a supporting character in the comic series “Love and Capes” by Thom Zahler. Jason’s first appearance is in “Love and Capes” (first series) #8 in 2008.

Jason is an employee at Abby’s bookstore. Abby hired Jason to replace the then-departed Charlotte, Abby’s sister and former employee. A film school student, Jason’s previous job was at a video rental store, where he didn’t manage to save much money. (He kept spending his paychecks on DVDs.)

Jason’s unaware of the superpowered nature of Abby’s beau, Mark (aka “The Crusader”). Upon seeing Mark lift with one hand a heavy box of books, Jason asks why he’s lifting an empty box like that. Otherwise, Jason’s shown as an earnest employee at the bookstore.

As many of the series’ characters are pastiches or analogues of famous superheroes, Jason might be an analogue of Jimmy Olsen, Superman’s friend. They’re both being younger friends/coworkers of their series’ lead characters, interested in media, and unaware their friend’s a superhero. Unlike Jimmy, however, Jason has one difference: he’s gay.

Given the romantic comedy aspects of the series, Jason’s eventually revealed to have a boyfriend of his own. Unlike Jimmy, said boyfriend isn’t a Lucy Lane analogue—that role’s already filled by Abby’s sister Charlotte. Still, Charlotte and Jason both end up as coworkers at the bookstore during the series’ run.