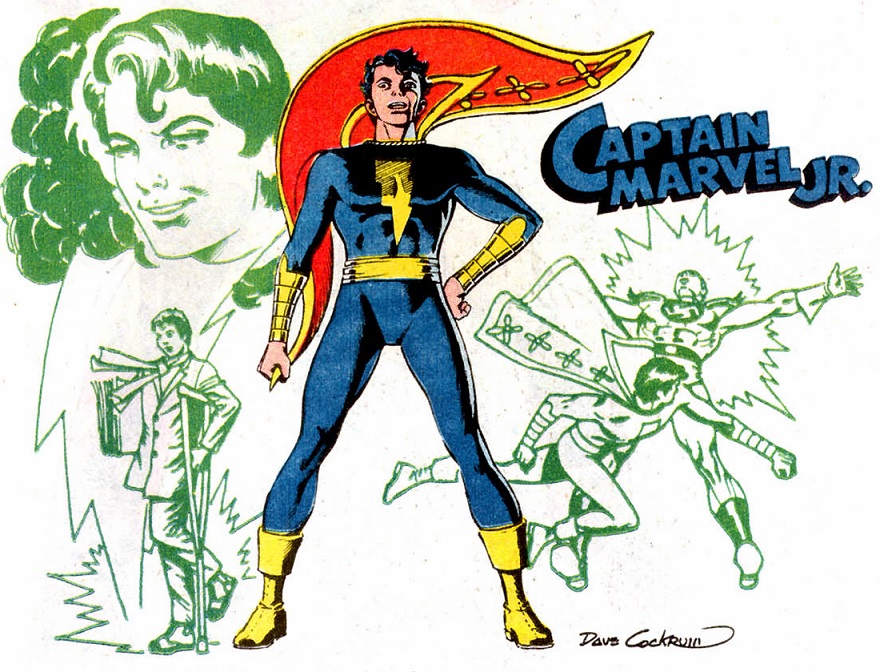 As Junior’s origin relates, Freddy Freeman was a kid who one day went on a fishing trip with his grandfather. At the time, Captain Marvel was nearby, fighting the vicious superpowered villain, Captain Nazi. A punch by Marvel landed Nazi into the water near the Freemans, who (thinking he was a drowning man) fished him out of the water. Nazi “repaid” the Freemans’ kindness by injuring Freddy and killing his grandfather.

Seeing Freddy was dying, Captain Marvel took him to the Rock of Eternity, the other-dimensional place where the ancient wizard Shazam dwells. The wizard noted he couldn’t heal Freddy’s injuries, but did say Captain Marvel could share some of his power with Freddy.

Awoken from his coma, Freddy uttered Captain Marvel’s name. This transformed Freddy into the superpowered form of Captain Marvel, Jr. Captain Marvel informed Junior that although he’s now superpowered, his normal body had to heal, so he couldn’t stay powered up all the time. Freddy agrees, and returns to normal, but begins a superhero career as Captain Marvel Jr. Junior would function both solo and alongside the rest of the “Marvel Family” (Captain Marvel and Mary Marvel).

In older comics, Freddy lived in a boarding house, and ran a newsstand. In the Golden Age, Junior had his own ongoing self-titled comic, published from 1942 to 1953. The art style (as drawn by Mac Raboy) was rendered in a more realistic fashion than in Captain Marvel’s own stories (as drawn by C.C. Beck). Captain Marvel Jr. stories also tended toward less whimsical subjects. Stories would focus on adventure stories, social issues of the day, etc. Junior would also often fight Thaddeus Bodog Sivana Jr., the criminal genius son of Marvel Family foe Dr. Sivana.

In 1953, Fawcett finally cancelled the Marvel Family’s books. The characters stayed dormant until 1973, when DC Comics bought their rights. During the 70s and 80s, the original and revival Marvel stories took place on “Earth-S.”

After “Crisis on Infinite Earths,” the Marvels were folded into the single DC Earth. However, it took until 1995 for Freddy to appear in a DC story again. In the late 90s, Junior appeared both in the “Power of Shazam” comic and in the Teen Titans series. Freddy also saw his superhero name change briefly to “CM3,” which (fortunately) didn’t last.

Freddy starred in the 2006 “Trials of Shazam” miniseries. However, it was poorly received. Freddy’s also appeared in the 2011 New 52 reboot. Given the New 52’s treatment of the Shazam mythos, the less said about it, the better.

As Captain Marvel Jr., Freddy’s powers consist of a teenage-sized version of Captain Marvel’s, which include: the wisdom of Solomon; the strength of Hercules; the stamina of Atlas; the power of Zeus; the courage of Achilles; and the speed of Mercury. All of these ancient deities/rulers’ powers give the Marvels abilities similar to those of Superman (minus the vision powers).

Unlike Billy and Mary (who transform by saying “Shazam”), Freddy transforms by saying the words “Captain Marvel.” This makes Freddy one of the few superheroes who can’t say his own name, since he’ll transform back to normal if he does.

Junior’s appeared in media, including the early 1980s “Shazam!” animated series by Filmation.

Freddy also has appeared in a few direct-to-video animated features (“Justice League: War” and “Justice League: Crisis On Two Earths”), and “Batman: The Brave and the Bold.”

A few modern incarnations, such as the “Billy Batson and the Magic of Shazam” comic, show Freddy using a wheelchair instead of a crutch.

However, Junior’s biggest media impact of all might be on famous singer Elvis Presley. Captain Marvel, Jr. was Elvis’ favorite superhero as a youngster. Junior’s costume and haircut are believed to have influenced Elvis’ look. Modern stories will sometimes play with this, showing Freddy as a fan of Elvis’ music.

Why did Clark Kent move from Smallville to Metropolis?
Anthony's DC Comics picks for June 2018
The 15 richest heroes in comics
Minorities in cartoons: "Milo Murphy's Law"
Share this post