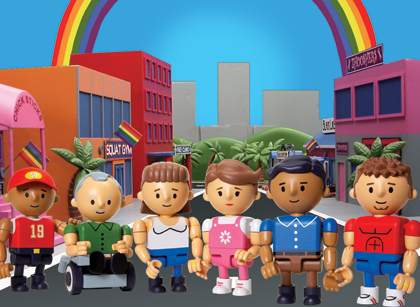 This week’s minorities in cartoons entry is “Rick & Steve: The Happiest Gay Couple in All the World.”

“Rick & Steve” is an animated series about the misadventures of the show’s stars Rick and Steve, a gay thirtysomething couple, and their extremely dysfunctional group of friends.

The series takes place in the fictional town of “West Lahunga Beach” in California. The town resembles the stereotypical aspects of various famous gay neighborhoods like West Hollywood, California and San Francisco’s Castro. As the bad-pun name of the town indicates, the show’s humor style is quite “blue”; the show’s world resembles an LGBT version of “South Park.”

Rick is of Filipino descent (as is the show’s creator, Q. Allan Brocka), and shown as smarter than his husband, Steve; the series shows this is to the point Rick joined a gay version of the intellectual group Mensa.

Supporting characters on the show include Rick and Steve’s friends Kirsten and Dana, a lesbian couple. Dana in particular reflects various lesbian stereotypes. Other friends include Chuck and Evan. Chuck is a 50-year-old HIV+ man who uses a wheelchair; Evan is Chuck’s vapid 19-year-old Latino boyfriend, who spends his time at nightclubs.

Plots on the series included Rick and Steve dealing with their respective families (Rick’s mother is gay-friendly, Steve’s mother isn’t) and Kirsten and Dana’s attempts at having a baby.

“Rick & Steve” ran from 2007 to 2009, for a total of 14 episodes spread across two seasons. The show ran on Logo (an LGBT-oriented cable channel) in the US and Teletoon’s “Adult Swim”-like nighttime block in Canada.

Both seasons are available on DVD.

Peter Paige voiced Steve. Paige’s most prominent role was playing Emmett on the American version of “Queer as Folk.”