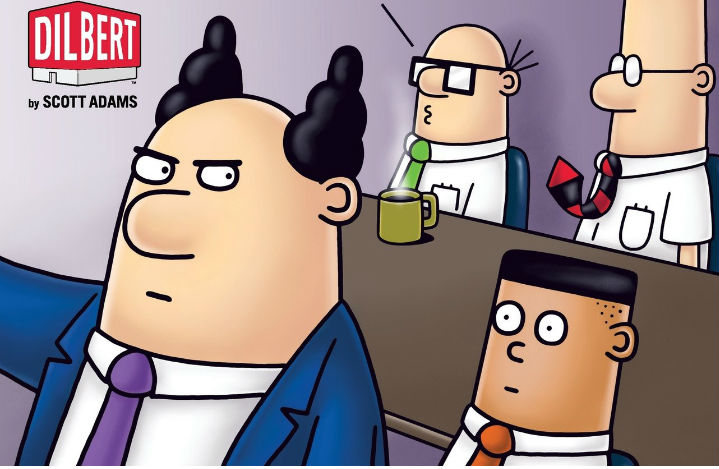 Asok was first introduced in 1996 as an intern for “Dilbert”‘s nameless corporation. His introduction into the strip, and main gag, is being an idealistic intern thrust into “Dilbert”‘s completely dysfunctional, soul-crushing workplace. As such, Asok will sometimes have higher-minded/more idealistic expectations than Dilbert, Wally, and company. He’s also shown being stuck in his position as an intern despite his qualifications. This is so the strip’s unnamed company can exploit his manpower/talents for intern-level pay.

Despite being one of the strip’s more optimistic characters, Asok will also (like Dilbert and Alice) point out the flaws in the company and its policies, even to the office’s Pointy-Haired Boss. Recently, Asok has been shown receiving “mentoring” and advice from Wally. Wally’s a coworker who does virtually nothing besides figure out how to slack off and drink coffee. As such, Wally’s perpetually shown holding or drinking from a coffee mug.

Early strips had a few jokes related to Asok having studied telekinesis at the Indian Institutes of Technology. Later strips opted to drop or ignore said ability.

A February 2014 strip was done in response to a recent Indian Supreme Court ruling that upheld an anti-gay colonial-era law. In the strip, Dogbert and Asok break the fourth wall to state their annoyance at the ruling. They then declare that Asok’s officially gay.

In the “Dilbert” TV series, Asok was voiced by Tom Kenny. Kenny’s also the voice of SpongeBob SquarePants.