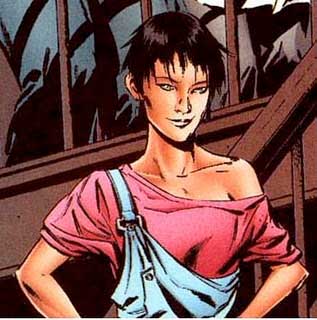 This week’s minorities in cartoons entry is Bridget Clancy, a supporting character in Nightwing’s comic in the 1990s. Bridget first appeared in “Nightwing” (vol. 2) #2 in November 1996. Chuck Dixon and Scott McDaniel created Bridget.

Clancy’s backstory states she was an orphan born in Hong Kong. An Irish couple adopted Bridget, and raised her in Ireland, before eventually emigrating to the United States. Clancy described herself in one story as “lookin’ like Kowloon and talkin’ like Londonderry.”

Clancy worked as a superintendent for an apartment building in Bludhaven, a city created for the “Nightwing” comic. Bludhaven is a city near Gotham City, with a supposedly worse crime rate. (Yeah, I know, “blood-haven”… yeesh. And worse crime than Gotham? Given modern stories beat to death the cynical idea that Gotham City is supposedly the worst place on Earth, I’m not sure how Bludhaven could be worse. But I digress.)

Nightwing’s solo series started with Dick Grayson (the original Robin, now known as Nightwing) having moved to Bludhaven. This finally gives the city an active superhero. Needing a place to live, Dick rented an apartment from Clancy, who took a liking to her new tenant. Humorously, Dick initially mistook Clancy as a Caucasian friend of hers, having initially only heard Clancy’s voice.

Dick wasn’t the only super-type in Clancy’s apartment building. Other tenants of hers included John Law (now-retired Golden Age hero the Tarantula), and an ex-Arkham Asylum inmate now reformed.

Clancy took pride in her building, and her tenants liked her in turn. At one point, Dick secretly saves her building from foreclosure.

Clancy and Dick felt some attraction to each other, and tried to date. However, nothing could develop between the two, thanks to Dick’s busy life (and double identity).

Clancy eventually decided to pursue her former goal of becoming a doctor. Enrolling in medical school (thanks to a scholarship assist from Wayne Industries), Clancy left Bludhaven. She left her apartment building under someone else’s management.

As for Clancy, 2006’s “Nightwing” #118 has her and Dick meet again in New York City. She’s studying psychology, and happy to be pursuing her dream.

From what I could find, she hasn’t appeared yet in the New 52 books. I’d assume her history described above hasn’t changed.

Also from what I could find, Clancy hasn’t appeared yet in any Batman- or DC-related media. I’d imagine she’s a supporting cast candidate if there’s ever a Nightwing TV show or movie.