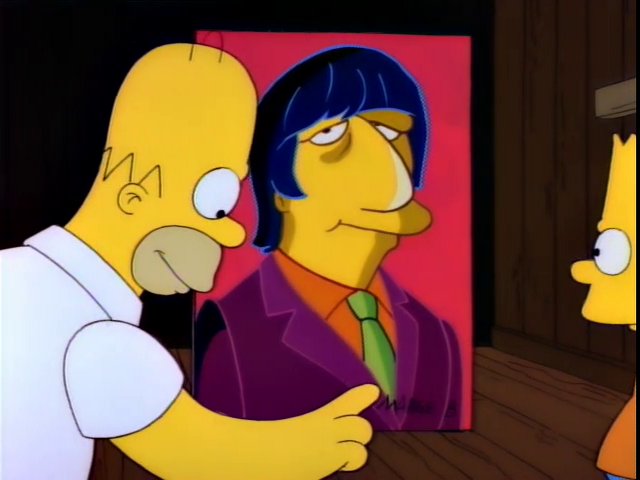 The Beatles have been mentioned and parodied in various media over the years, including in comics and animation.

Below are some of the more noteworthy cartoon references to the Fab Four.

The Simpsons has made frequent references to the Beatles.

Among other instances, the “Be-Sharps” episode’s a thorough parody of the Fab Four.

Season two’s “Brush With Greatness” states Marge was a big Beatles fan during her teen years. (I suppose it could still apply even with the show’s timeline sliding in newer episodes making Marge too young to have been alive in the 60s.) The living Beatles members have even done guest voices.

Here’s something that sounds like an oddity: a lost television cartoon.

Back in 1966, CBS debuted a cartoon called “The Beagles,” a show produced by Total Television (the makers of “Underdog”). “The Beagles” obviously was meant to cash in on the popularity of the Beatles.

The show was about Stringer and Tubby, a two-dog music group. Stringer and Tubby behaved and sounded more like Dean Martin and Jerry Lewis (respectively) than any of the Fab Four. The duo got into various misadventures thanks to the publicity stunts of their manager, Scotty (a Scottish-accented terrier).

The show lasted a few seasons on Saturday mornings. For years, the show’s been considered “lost,” as it was believed the original copies of the show were missing. Fortunately, that’s (technically) not the case. However, as the show never entered syndication extensively, there’s still no sign of the show anywhere, besides a few clips on YouTube.

During its brief run, an LP soundtrack was released. In the 1990s, someone released an unofficial CD version (alongside songs from “The Banana Splits”).

Jersey City, NJ radio station WFMU ran on their blog a series of articles about fake Beatles-like bands in media, including the Beagles.

Silver and Bronze Age DC made occasional references to the Fab Four:

The Beatles got referenced in the Marvel Universe as well.

A few latter episodes of the show’s run parodied the Beatles, through the lens of the show’s middle-aged writers. Several British Invasion-style rock groups visited Bedrock, including the “Way-Outs.”

The second episode featuring hillbillies the Hatrocks, “The Hatrocks and the Gruesomes,” has the hayseeds note they “can’t stand ‘Bug music’!” (by a group called the “Four Insects”) while overstaying their welcome at the Flintstones’ house. Cue Fred and the gang dressing up in Beatle wigs and rigging a radio and telephone to play said music. This manages to drive the hicks back to “Arkanstone” (prehistoric Arkansas). Said “Bug music” is an off-key repetition of “yeah, yeah, yeah,” a la the Beatles song “She Loves You.”

The 90s Warner Bros. series referenced the Beatles on occasion:

The comic strip FoxTrot shows Andy nostalgically looking over some Beatles vinyl albums from her younger years—at least back when said “younger years” would’ve been during the 60s… yes, sliding timelines once more. This got a “what are records?” comment from Jason, with Andy suddenly feeling less-young.