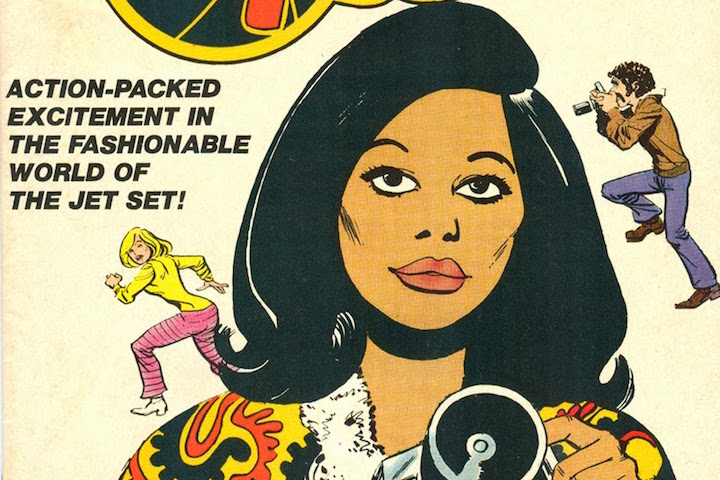 This week’s minorities in cartoons entry is the early 1970s comic strip (and its star) “Friday Foster.” Friday was created by writer Jim Lawrence and artist Jorge Longaron.

“Friday Foster,” debuting in 1970, was the first mainstream newspaper syndicated comic strip to star a non-stereotyped African-American woman. The strip focused on the adventures of Friday Foster, a former model who became the assistant to a world famous fashion photographer. Early installments of the strip focused on Friday’s background and family in Harlem, but the strip eventually shifted to a soap opera/romance format. The writing shift also saw Friday traveling the world, with stories taking place in Paris, Hong Kong, and London.

“Friday Foster” came to an end in 1974. Dave Karlen’s blog suggests it ended due to the logistics of producing the strip (Longaron was a Spanish artist living in Spain) and a decline in popularity.

However, the comic strip did see a few media spinoffs. Dell (of “Four Color Comics” fame) published a one-shot comic book of Friday in 1972. A few online sources claim it was Dell’s final published comic. However, that’s incorrect, as Dell continued to publish comics for another year before going under in 1973.

In 1975, a live-action feature film debuted, with actress Pam Grier playing Friday. The film had the usual “blaxploitation” elements of the era.

In 2009, a line of Friday Foster dolls were produced, suggesting that there’s people who still fondly remember Ms. Foster. While there doesn’t seem to be a reprint collection of her comic strip/book, perhaps that’ll change in the future?