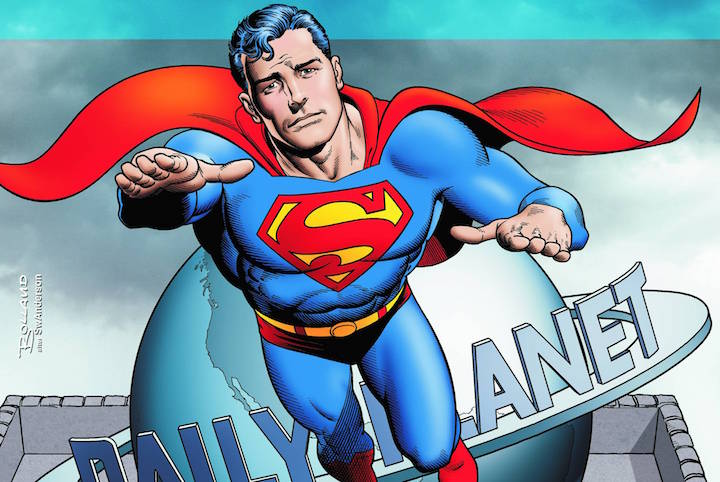 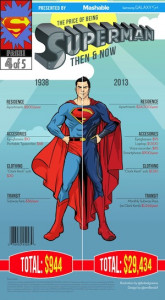 Recently, a series of infographics have been published on Mashable discussing what it’d cost to “be” various superheroes. Said infographics look at the costs from the various characters’ origin years, and compares them to their modern equivalents, allowing for inflation/changes in technology. The granddaddy of heroes, Superman, was given such an infographic analysis, of course. Here’s a link to the infographic in all its glory. And here’s my analysis of what it’d cost to be Superman, as well as the various history of super-accessories.

(I’ll ignore the lack of a spitcurl in either version depicted, or the ugly “New 52″/”Man of Steel” 2013 costume in general.)

Traditionally, Clark Kent lives alone in a one- or two-bedroom apartment at 344 Clinton Street, Apartment 3D, in midtown Metropolis. Clark’s apartment is usually shown as looking fairly nice. $1200/month would get a fairly nice apartment in Chicago; however, that wouldn’t be enough for anything in New York (save maybe somewhere dumpy). New York’s usually the real-world city on which Metropolis is based, though the Big Apple exists in-universe, too. Perhaps we can assume Metropolis is more Chicago-level expense-wise than New York-level. This, of course, ignores the debate over where Metropolis is located.

I assume the figure isn’t including utilities (electricity, water) or things like Internet access or cable TV.

Since Clark only wears eyeglasses as part of a disguise (and in some stories, were hand-me-downs from Pa Kent), he’d mostly be concerned with paying for frames. For lenses, any cheap lenses would do, of course. In Silver/Bronze Age stories, the lenses were roundish broken pieces of his rocket’s windshield, which would withstand using his heat vision.

Clark’s usually shown with some sort of laptop in modern stories. The pricing above seems to assume Clark’s a Mac user; “Smallville” showed Clark using an iMac, so maybe so. In that case, $1500 (as of late 2014) will buy Clark a 128GB HD Retina 13″ MacBook Pro, plus the cost of AppleCare/whatever sales tax runs in Metropolis.

While there’s an argument for stand-alone devices, I’d figure Clark might skip having a voice recorder and just go for using his smartphone to record interviews instead. (Depending on continuity, his super-memory would also help him remember everything said in interviews.) For the smartphone, $900/year comes to $75/month, which gets an entry-level on-contract smartphone plan. Still, would think Clark might want to go for a plan with more minutes, given he’s always on the go. No indication what smartphone Clark would use, though if he’s going with a MacBook, he might want to stay in the Apple ecosystem and buy an iPhone. Of course, for contacting Batman, Clark could just use his JLA communicator (or depending on continuity, super-ventriloquism), and save on phone minutes.

Traditionally, Clark wears a conservative blue colored suit with a white shirt and a tie (usually red). Yes, those are the same colors as his famous costume. While I’m not sure what a suit would’ve gone for in 1938, I’m pretty sure Clark isn’t spending $1500 on one suit—he’s not Bruce Wayne, after all. Assuming Clark wants at least seven sets of suits, ties, and dress shirts—one for each day of the week—that’s about $216 per outfit. That’s a much more reasonable price tag for a “mild-mannered reporter.” Not factored in are dry-cleaning costs, though imagine his powers/Fortress of Solitude tech might take care of that.

When not flying to work, Clark usually takes mass transit like many big-city dwellers. To that end, that’s $112/month on the subway. Checking online, that’s the price of a 30-day unlimited usage subway and bus pass for New York City. However, given Clark’s cited apartment rent seems more in line with Chicago than New York, perhaps Metropolis subway costs are similarly less. In that case, it’s $100/month ($1200/year) for unlimited L train and bus usage in Chicagoland.

Other factors not included in that infographic for Superman include:

Despite being “super,” Clark still enjoys eating, or feeding guests he has over. 1980’s “Superman Family” #204 has a story where Clark is forced to grocery shop for his neighbor, and notes how he’s glad he has his food delivered to his apartment. I don’t recall many other stories showing him grocery-shopping, so maybe that’s still the case even with the reboots-du-jour. Online grocery delivery service Peapod charges $7-$10 per grocery delivery, depending on amount purchased. Of course, there’s also that Clark, not needing to worry about mere mortal needs like nutrition, might also eat out a lot like many big-city dwellers. “Superman: The Animated Series” shows Clark’s not shy about chowing down on street-vendor hot dogs.

Unless they’re “going Dutch” or Lois is treating Clark, Clark needs to buy stuff for Lois (meals, flowers, birthday gifts, etc.). Of course, as Superman, that might be made easier: exotic flowers picked from the Amazon rainforest (as in the Reeve movies), etc.

Clark usually attended Metropolis University for a bachelor’s degree in journalism; indeed college is usually the main reason cited in comics since the 50s for Clark moving to Metropolis in the first place. Unless Clark got a full scholarship (which he got in some versions) and/or has money saved up, we’re looking at Clark taking out (and paying back) a few Stafford loans.