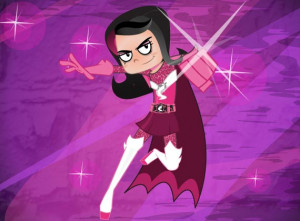 Cable TV channel The Hub introduced this weekend a new-to-the-US show named “SheZow.” Produced in a joint effort between Australian and Canadian companies (though seems more Canadian), the show’s been airing outside the US for months already.

“SheZow” focuses on the adventures of a 12-year-old boy named Guy who, upon finding his deceased aunt’s magic ring and putting it on (as a joke), gets turned into a female superhero named “SheZow.” Now stuck with the ring permanently (it won’t come off), Guy fights crime using SheZow’s various equipment, which is largely stereotypically feminine—a utility belt with super-hairspray, a pink colored car, etc.

Given the nature of the show, it’s attracted the attention of some anti-LGBT types already, particularly One Million Moms. Fresh from their unsuccessful protests of Archie Comics’ Kevin Keller (and Disney World’s “Gay Day”), they’re now contesting “SheZow” for their usual idiotic reasons:

Yes, you read that correctly. When Guy says the magic words “You go girl!” he becomes SheZow the superhero.

There is no doubt this superhero character will confuse kids. Children desire to be just like superheroes and will mimic a superhero’s every action, even to the point of dressing up in costumes to resemble the characters as much as possible. It won’t be long before little boys are saying, “I want to be a girl, so I can help people and save the world!”

That’s right, we wouldn’t want boys to admire girls and women who work to help others. Take that, lousy Girl Scouts!

As for the show itself, I’ve only seen the pilot episode that debuted this past weekend. The show seems a bit tame to me—not bad, but not “Animaniacs”-style hilarity. Guy reminds me of Johnny Test somewhat, as does the villain in the pilot, a pint-size Mr. Freeze-like bad guy. The Flash animation also looks decent enough (for Flash, anyway). There’s also a lot of “she-” puns in the pilot episode, something I assume will be a bit lessened in future episodes. I also assume we’ll see SheZow’s backstory/legacy fleshed out more as the show goes on, including the aspects of SheZow’s powers/gear. Finally, no, Guy doesn’t physically become, or self-identify as, a girl—he’s just dressed like one. Guy even tries to alter his voice to a higher pitch when speaking at a SheZow fan club convention.

While I don’t think this show will become a massive hit like The Hub’s top show, “My Little Pony: Friendship Is Magic,” I don’t expect it to suffer a quick death a la the late, lamented “Whatever Happened to Robot Jones?“