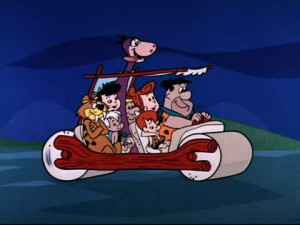 Yes, the Flintstones are finally returning, via a direct-to-video movie. Other than the Pebbles cereal commercials, this marks the first time we’ve seen everyone’s favorite modern Stone Age family in an actual animated adventure since 2001’s “Flintstones: On the Rocks” TV-movie, which Cartoon Network’s largely buried since it initially aired.

However, this film, due in 2015, isn’t just another stand-alone sitcom story. Instead, it’s heavily tied into professional wrestling, namely the WWE. As Deadline.com reports, various popular WWE stars will be in the film, which focuses on the gang attending a prehistoric pro wrestling match.

Oddly, the “Rock” won’t be in this film, despite his appropriate name, though suspect it’d be too expensive to include him, given he’s more of an action film star nowadays.

I do wish the first major animated appearance of these characters in 14 years wasn’t tied to pushing the WWE. Between this and Time-Warner willing to hand the Flintstones over to Seth MacFarlane (before that project was pulled), I almost half-wonder if just shilling cereal/airing in reruns on Boomerang would be better. Still, on the positive side:

I’ll assume that Fred and Barney entering the ring goes about as well for them as it did in this outing against the prehistoric Hulk Hogan, as seen in a Pebbles cereal ad several years ago. The real Hulk Hogan sued over the ad, with the result of an out-of-court settlement (and the ad removed from the air)…

Cartoons at the box office: Godzilla squishes Spider-Man (and stomps everyone else)
RIP Leonard Nimoy
The best of minorities in cartoons: Women in STEM
DC Comics to reboot Hanna-Barbera characters
Share this post