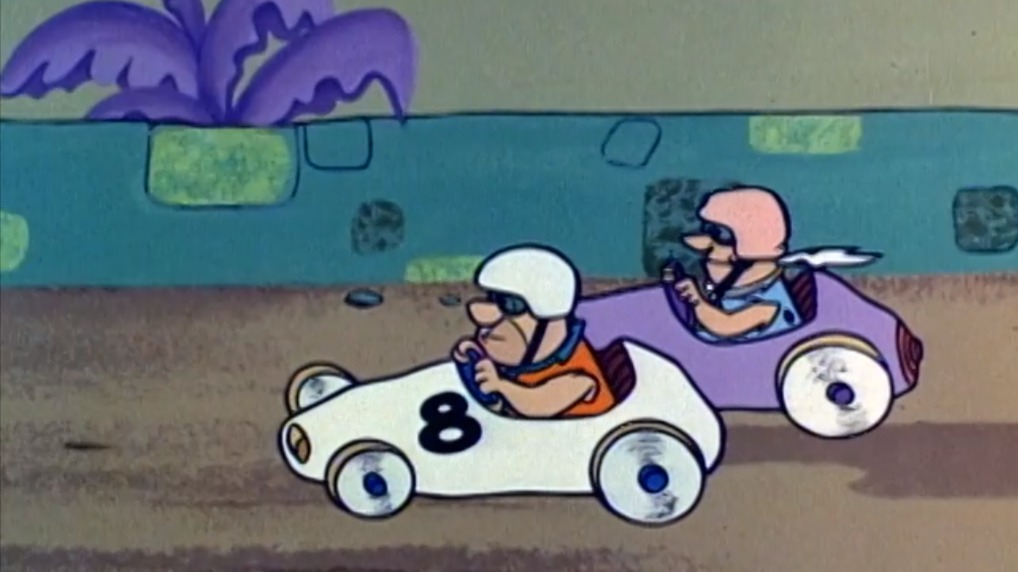 Memorial Day weekend marks the annual running of the Indianapolis 500 auto race, the one time of year when the country actually pays attention to the capital of the Hoosier State. The race is not only the country’s most famous auto race (sorry NASCAR fans), but is even depicted on the Indiana state quarter from the 2000s.

It’s no surprise, then, that media frequently mentions the race, and that includes cartoons. Here’s a few examples of the Circle City’s famed auto race in cartoons.

“The Flintstones” has referred to the Indy 500 on occasion. The best take was the original series’ episode “Indianrockolis 500,” where Fred enters a car (with an actual engine) into the race. The episode reveals that Bedrock’s within driving distance of Indianrockolis. And yes, the cars here having actual engines (versus their usual foot-powered vehicles) plays into the episode’s resolution.

The series as a whole often varies on whether their cars are foot-powered or gas-powered, given the occasional appearance of elephant-gas-“pump” gas stations. I figure their cars are like mopeds, thus making them both foot- and gas-powered. An episode of the spin-off “The New Fred and Barney Show” (titled “Moonlighters”) seems to support this. Fred’s car in that episode has a dinosaur-in-a-hamster-wheel engine, and it’s treated as an optional/luxury item (like heated seats in real cars). 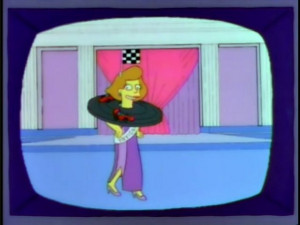 The episode “A Streetcar Named Marge” featured a beauty pageant on TV. One of the contestants is “Miss Indiana,” who’s wearing around her body a working model race car track.

Not a direct reference to the race, but there’s this hilarious exchange in the episode “$pringfield” (at Mr. Burns’ casino):

Jim Nabors is famous for (besides “The Andy Griffith Show”/”Gomer Pyle”) singing the unofficial state song, “Back Home Again in Indiana” before the start of each running of the race. This is despite Nabors not actually being a Hoosier. This tradition came to an end in 2014, with Nabor’s final singing before retiring.

A Buttons and Mindy short, “The Mindy 500,” is a typical entry in the series. The plot features dimwitted toddler Mindy winding up on the Indianapolis racetrack; Buttons as usual is forced to rescue her, getting repeatedly maimed in the process. As usual, the episode ends with Buttons blamed by his owners for supposedly not watching Mindy. Like all of the “Buttons and Mindy” shorts, this one’s worth skipping.

An episode of the original 60s run (“A Date With Jet Screamer”) has George accidentally smash his hovercar through a billboard. A cop on a hover-scooter pulls up behind him, yelling “what do you think this is, the Indianapolis 500,000?!” Apparently in the future, Indianapolis gets to keep its original name (unlike Las Vegas becoming “Las Venus”), but increased the race’s length a thousand-fold.

An episode of “Peabody’s Improbable History” sees Peabody and Sherman travel back in time to witness—and end up participating in—the first Indianapolis 500 auto race. Cue the obligatory series of bad puns—the villain of the race is the fiendish “Carmen Dioxide,” for instance. The 2013 movie “Turbo” centers around a snail with super-speed powers entering the Indy 500. See my separate post for more about “Turbo” (and its made-for-Netflix spin-off series, “Turbo FAST”).

Captain Marvel and the rest of the Marvel Family visited Indianapolis in “Shazam” #33 (Jan.-Feb. 1978), where he raced the villainous robot Mr. Atom.

It’s not their first time in the Circle City—that’d be way back in “Captain Marvel Adventures” #35 in 1944, where they briefly drop in on an Indianapolis Indians baseball game.

Indy’s appeared in Marvel comics too. Tony Stark visited Indianapolis in “Tales of Suspense” #45 (Sept. 1963) and briefly raced the “Stark Special” in the Indianapolis 500. However, heart trouble forced Tony out of the race.

The issue’s more noteworthy for being the first appearance of a few Iron Man mythos aspects, most prominently Pepper Potts. (Stark’s company itself first appeared, unnamed, a few issues earlier, in “Tales of Suspense” #43.)