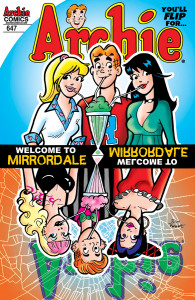 The Archie-proper title seems to have eased off of the stunt storylines for the moment, though it’s delving back into parallel universes (again) with this month’s story.

Jughead gets the “Double Double” Digest treatment this month, coming in at 320 pages (and $6).

The third volume of the “Sabrina the Teenage Witch” manga paperback compilations is being released, completing most of the series’ run. One volume left to go!

“Archie & Friends Double Digest” features Kevin Keller on the cover. Until now, I don’t think Kevin’s ever appeared on a digest cover, this “Betty and Veronica” digest aside. Kevin’s also shown with Chuck; I don’t think the characters have interacted much in stories to date, despite that they both like sci-fi. In real world terms, both characters also were introduced to add diversity to Archie’s cast. Of course, like Chuck’s solo backup stories, I’d expect Kevin’s own stories to wind up reprinted in digests someday. I’d still like to see Chuck get his own solo series, something he’s never had; however, “Archie at Riverdale High” in the 70s/80s apparently became a Chuck-centric title for awhile.