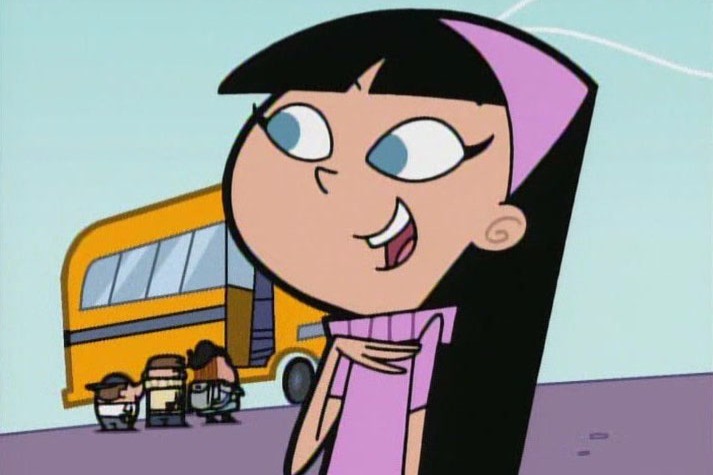 This week’s minorities in cartoons entry is Trixie Tang, a supporting character on Nickelodeon series “The Fairly OddParents.”

In the series, Trixie is Dimmsdale Elementary’s most popular and wealthiest girl. Most of the boys in the school have a crush on her and strive to attract her attention, usually without much success.

Trixie spends much of her time hanging around two popular, wealthy kids named Chad and Tad who, like “Johnny Test”‘s Mr. Black and Mr. White, look like they could be twins if they weren’t of different ethnicities.

She’s also been known to snub unpopular students in her class, even calling in bodyguards, etc. to remove them from her presence if necessary. Said unpopular kids, of course, include series star Timmy Turner. Timmy has an unrelenting crush on Trixie, and tries various tactics to win her over. None of them really succeed, however.

One episode, “Information Stupor Highway,” revolves around Timmy trying, via wishing himself into the Internet, to prevent Trixie from reading a mushy love email he wrote, but didn’t mean to send. Another episode sees Timmy wish Trixie and himself were the only two people on Earth; however, that also backfires, as Trixie’s too used to constant attention.

In perhaps a nod to Archie’s Betty and Veronica, Trixie’s best friend is Veronica, a blonde girl who does like Timmy. Unlike the Archie character, Trixie’s secretly and crazily obsessed with wishing she was her best friend.

A few episodes show Trixie actually indicating she might like Timmy on some level. At least one episode shows she has some less-shallow interests. However, she usually reverts to type by the end of the episode.