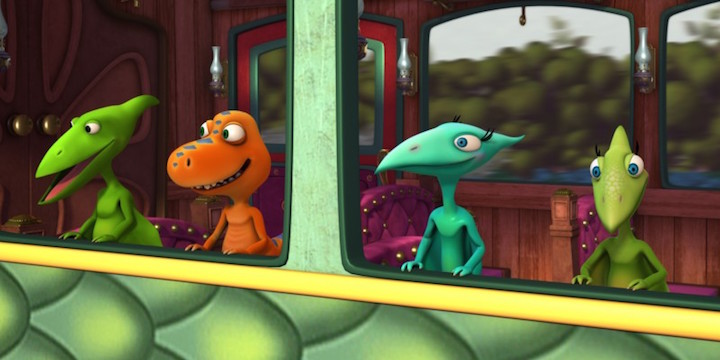 PBS’ children’s programming lineup has been particularly cartoon heavy over the past 15 years, ever since  “Arthur” first became a big hit in the 90s. I’m assuming one reason is that it’s cheaper than producing live-action programs; however, PBS still makes those too, such as a new version of my childhood’s “The Electric Company.” Animation also allows them to produce shows that wouldn’t work as well in live action, such as their recent hit “Dinosaur Train.”

The show centers around the Pteranodon family, Mom and Dad, and their kids: Shiny, who is rather shiny-looking, and likes shiny objects; Tiny, the smallest of the kids, but is friendly; Don, who enjoys collecting things (and, admittedly, isn’t as smart as the other children, but tries his best); and Buddy, a curious Tyrannosaurus rex who Mom and Dad adopted as an egg, and love as much as the rest of their offspring. Like Timmy’s parents on “The Fairly OddParents” or Dexter’s parents on “Dexter’s Laboratory,” Mom and Dad have no actual names, and are called “Mr. and Mrs. Pteranodon” by everyone. Oddly, this stretches to the kids’ grandparents, as well, in the appearances by “Grandma and Grandpa Pteranodon,” who just call their son “son.”

The family as a whole enjoy various excursions on the show’s signature feature, the “Dinosaur Train”: a time-traveling 19th century-style steam locomotive train. The railroad is run by Troodons, a species of dinosaur said to be the “smartest dinosaurs” due to their brain size. The train’s Troodon conductor, who has no name besides “Mr. Conductor” and has a voice that sounds a bit like the late Don Knotts, runs things on the train: collecting tickets, calling out the station stops, etc. The Conductor also usually explains to the Pteranodon offspring about various dinosaur facts. The train itself travels through time via the use of (magical?) “time tunnels” that lead throughout the entire Mesozoic era. It stops at various stations named after dinosaur species (“Pteranodon Terrace,” “Rexville,” “Brachiosaurus Corners,” etc.).

The time-travel aspect, of course, helps to avoid temporally-misplaced dinosaur species, since the famous ones lived millions of years apart. The show goes well beyond the usual “stock dinosaurs” (as TV Tropes refers to them). It covers various less famous dinosaur species (Lambeosaurus, Giganotosaurus, etc.).

“Dinosaur Train” also covers the non-dinosaur species that existed in the Mesozoic, such as reptiles, amphibians, insects, and early mammals. There’s also a focus on some other life lessons (such as enjoying nature) or episodes about the characters’ lives. One example is Mom and Dad celebrating their anniversary.

The series also strives for scientific accuracy (cartoonish look of its star characters aside). The velociraptors here are correctly presented as having feathers, and birds are identified as a type of dinosaur. Predation is treated as existing in a manner-of-fact fashion. Buddy often asks of the species the family meet if they’re herbivores, carnivores, or omnivores. However, it largely happens off-screen, aside from the Pteranodon catching fish/carnivores eating already-deceased piles of meat.

For those joking about “why doesn’t Buddy eat his family?,” besides suspension of disbelief, Buddy’s shown eating carrion when riding the Dinosaur Train (the dining car’s often featured). In addition, Buddy’s also seen being fed fish by his also-carnivorous (though fish-eating) Pteranodon family.

Each episode is followed up by a live-action segment featuring a paleontologist (Dr. Scott Sampson) explaining some scientific facts about the episode just shown. There’s also an occasional appearance by the “Point of Fact” Guy. He’s a person who points out such things as “dinosaurs did not ride trains/sing songs/etc.”

I find the show enjoyable, as well as educational, even for adults. I’d never even heard of many of the species the show presents before watching. It also doesn’t speak down to its kid viewers via “Dora the Explorer”-style fake interactivity.

The time travel is presented in a “Bill and Ted” “time tourism” fashion; no time paradoxes are brought up or occur despite species from different eras mixing freely (and knowing about the future eras/species). If anything, it seems amusing to think that creatures stereotypically stated to have brains the size of a walnut have fewer problems with time travel than oh-so-advanced humans apparently do. Dinosaurs traveling millions of years to visit friends in another part of the Mesozoic, no problem. Humans trying to time-travel a few decades or centuries tops, cue problems (sports almanacs, killer robots, Orwellian continuity changes/reboots, etc.).

Unrelated to the show, but Dr. Sampson’s blog might be of interest to adults interested in paleontology, as well as nature, climate change, and science in general.