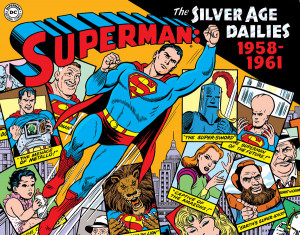 Here’s what’s of interest from various comic companies for June 2013.

The “Star Trek”/”Legion of Super-Heroes” crossover’s being collected into trade paperback form this month. While I didn’t care for the miniseries, Trek/Legionnaire fans might still be interested.

Berkeley Breathed, cartoonist of “Bloom County” fame, gets a book dedicated to his artwork/cartooning career.

Starting in July comes a series of reprints of the 1939-1966 “Superman” newspaper comic strip, which featured stories/art by the same people who worked on the comic books at the time. (A few of the comic strip storylines were also adopted into the comic books, and vice-versa.) Despite that newspaper comic strips don’t fit comic books’ “Golden Age/Silver Age/etc.” definitions very well, they’re being released in this series in three parts: “Golden Age” (presumably the 1940s strips), “Atomic Age” (an infrequent name given to comic books of the 1950s), and “Silver Age,” starting here with 1958. 1958 was the year DC published the first generally-considered Silver Age Superman story, “The Super-Key to Fort Superman” (from “Action Comics” #241; the first appearance of the Fortress of Solitude).