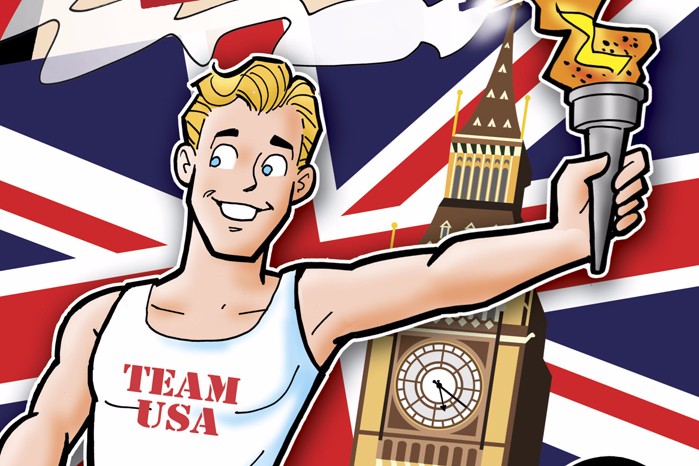 “Welcome to Riverdale” is a trade paperback collecting the first four issues of Kevin Keller’s ongoing series. (His appearances in “Veronica” and a stand-alone miniseries were collected in an earlier volume.)

Archie’s first openly gay character has proven to be pretty popular since his introduction. I read this series as single issues, but here’s my thoughts on the stories collected in this volume. (Warning: spoilers ahead.)

The first story focuses on Kevin dealing with something that he’s not good or experienced at: dating. As he prepares to go on his first real date, Kevin’s family and friends give him various bits of advice. Some of it’s useful (the ever-popular “be yourself”), and some of it not so useful (Archie’s advice).

The story has Kevin break the fourth wall (like some Archie stories occasionally do) to sum up his background for any new readers. Kevin also gets to engage in the usual Archie-style hijinks (read: some slapstick humor). The story also puts to rest the idea of Kevin being the “only gay guy in Riverdale,” with several prospective dates shown.

In the second story, we see it’s prom time yet again at Riverdale High. As class president, Kevin (with help from Veronica, who’s on the prom committee) decides on the 1970s as this year’s prom theme. Meanwhile, Kevin finds himself receiving notes in his locker from a “secret admirer,” while also pondering who to ask to the prom.

This was a nice story, with the “admirer” not turning out who I’d half-expected (a prank from Reggie, Veronica still pining for Kevin, etc.). However, I was hoping we’d see Kevin at the prom with an actual date… which makes me wonder what happened to the guy he went to the film festival with in the previous story. Maybe it didn’t work out? Or the guy found his own separate prom date?

Summer’s arrived in Riverdale, and with it, a summer job for Kevin: being a lifeguard at Riverdale’s beach. Cue the appearance of Cheryl Blossom, along with her entourage of friends; sand friends include a homophobic cohort named Sloan. Akin to a 60s teen beach movie, Cheryl’s pals challenge Kevin, Archie, and the gang to a surfing contest, which Kevin accepts.

This was an enjoyable story, with Kevin getting the usual support from his friends, plus making a new one. However, I wonder at what point Kevin met Cheryl; he seems familiar with her (and her personality) upon “rescuing” her. Though given the high number of adventures the Archie gang must have in a single year (per comics’ frozen-in-time nature), I can assume the two secondary characters previously met off-panel.

In this story, we see the Keller family, with Veronica in tow, revisit their old stomping grounds of London. Said trip is in time for the 2012 Summer Olympics, which Kevin gets to take part in as a torch runner. Kevin’s love life isn’t dealt with here; it’s mostly slapstick hijinks once the torch bearing begins.

While a nice story, it’s also the most dated one out of the four in “Welcome to Riverdale.” I assume if it’s ever reprinted in a digest, the Olympics references will be changed to some fictional sporting event.