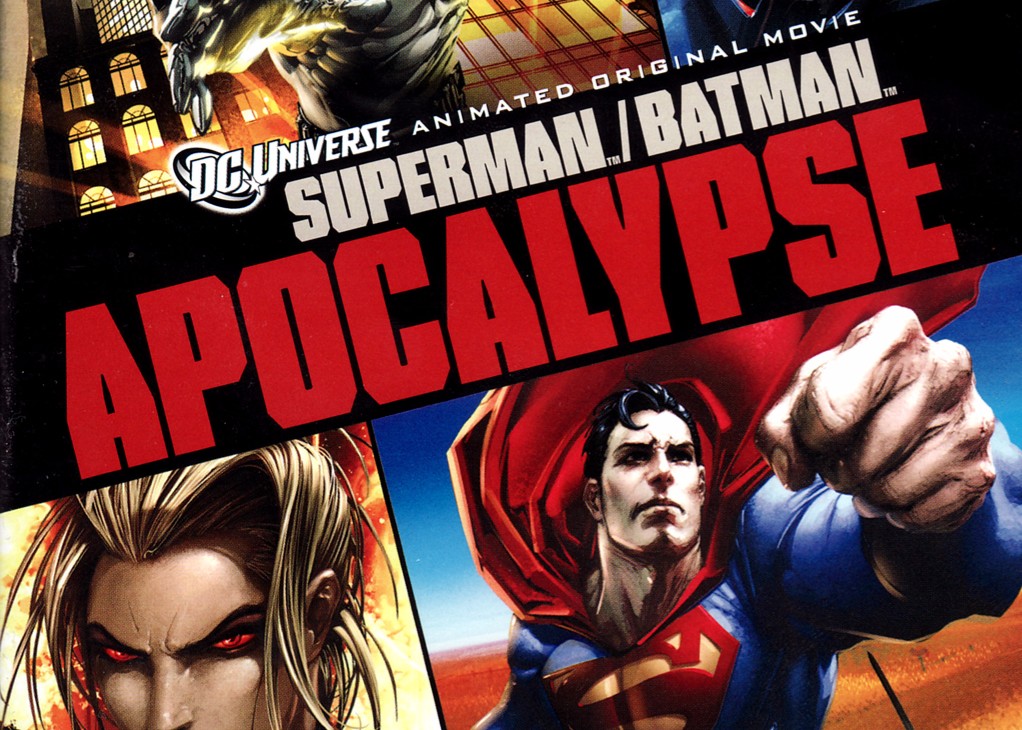 The latest animated film I’ve seen is the direct-to-video movie “Superman/Batman: Apocalypse.” The film is based on a 2000s comic storyline that re-(re-re-etc.)-introduced Supergirl to the then-current DC Universe in yet another revised origin story for the Girl of Steel.

The film’s general plot: Kara Zor-El lands on Earth in a meteor shower, having been sent from Krypton years ago but only landing on Earth just now. Batman and Superman find her, and after Superman speaks with Kara in Kryptonese, discovers that she’s his cousin.

Meanwhile, Batman is suspicious of her, as is Krypto. After Kara settles in with Clark at the Fortress of Solitude (and learns English/goes with Clark on a trip to Metropolis), Wonder Woman suddenly shows up (called in by Bats) to forcibly abduct Kara to Paradise Island to be trained in the proper use of her powers (Diana and Bruce having decided “it’s for the best”). Clark at first argues otherwise, but eventually relents (despite Kara’s protests). Cue Kara being trained by the Amazons and making a friend while there.

Meanwhile, the evil villain Darkseid has learned of Kara’s presence on Earth. He subsequently kidnaps/brainwashes her into being his newest super-powerful minion. It’s then up to the “Trinity” of heroes (Superman, Batman, and Wonder Woman) to rescue Kara and bring her back to Earth.

Some parts were enjoyable, and Kara is an enjoyable individual. However, it’s too bad she seems to not have much control over her own life (even ignoring she’s a teenager/etc.). I didn’t care for how convoluted a path it took to lead her to become Supergirl in the end, nor that she seems treated more like an object by most of the characters. There’s especially the “we’re kidnapping you for your own good” bit (which doesn’t seem very heroic to me…).

I also wondered about who thought it was a good idea of showing Kara naked. Didn’t she have any clothes when she was launched to Earth? Plus said clothes should be invulnerable/stretch to fit under a yellow sun. (As long as the film’s going with largely the old-school version of the mythos.) I still dislike the “belly-exposing-shirt”/”not-even-a-miniskirt” skirt she has as a Supergirl costume (the 2000s version of her outfit). Belly-exposing-shirts should’ve gone out with Britney Spears’ turn-of-the-millennium heyday already.

Of course, since the comic this film’s based on came out, there’s been yet another revision to the Supergirl mythos (with the “New 52” reboot). There, Kara’s gained yet another origin story (and slightly-better costume). Still, I think I preferred her original Silver Age backstory (from her first appearance). Granted, “Superman putting her in an orphanage” doesn’t sound good. However, it beats “forcibly abducted by Amazons and Batman/showing up on Earth in her birthday suit for no good reason.”

As far as animated takes are concerned, the Girl of Steel was much more enjoyable (and better treated) in the 90s “Superman: The Animated Series” version of her origin. There’s also the short-lived recent Cartoon Network series “Super Best Friends Forever.”

The animation is adequate, with the style keeping with the more realistic look of DC’s direct-to-DVD movies of late.

The voice work is also excellent. 90s DC animated series veterans Kevin Conroy, Tim Daly, and Susan Eisenberg returning to voice Batman, Superman, and Wonder Woman respectively. There’s also Ed Asner once more as Granny Goodness. Supergirl herself is voiced by Summer Glau, an actress known for the “Firefly” series and one of the “Terminator” spin-offs.