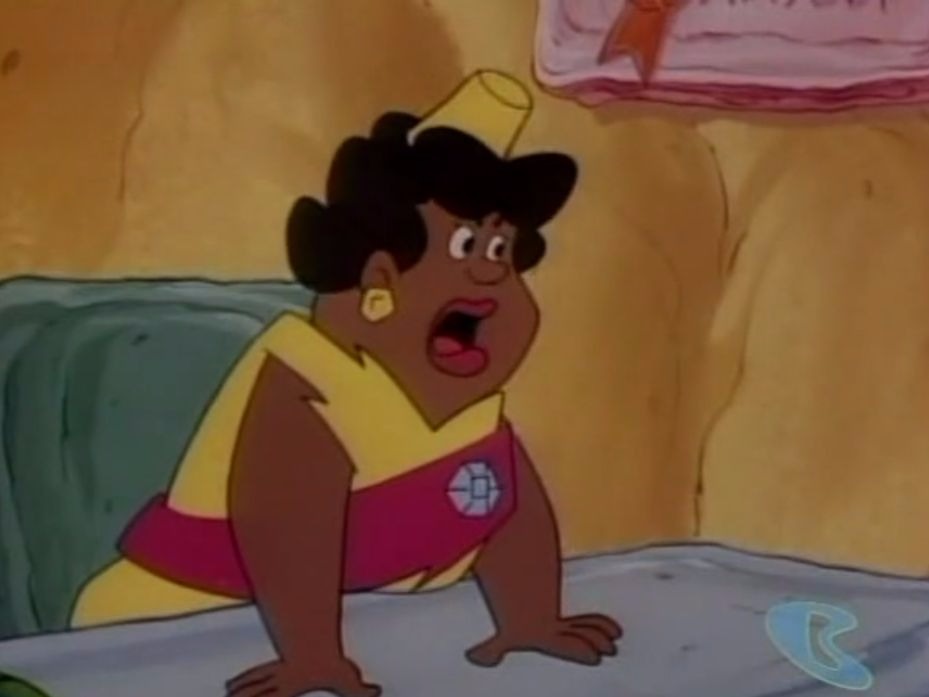 This week’s “minorities in cartoons” entry is the unnamed mayor of Bedrock. The Mayor appeared in “The Flintstone Kids”‘s “Captain Caveman and Son” shorts.

She’s one of the only two recurring minority characters in overall Flintstones canon. The other character, of course, is Philo Quartz, another “Kids” supporting character.

Madame Mayor appeared in the “Captain Caveman” segments. Said segments appeared on “Kids” as a show young Fred, Barney, Betty, and Wilma liked to watch. Never mind the adult versions of Wilma and Betty met and worked with a not-a-TV-character Captain Caveman in a previous “Flintstones” spinoff, of course.

“Captain Caveman and Son” featured the adventures of Cavey. Presumably, this was well before the accident that froze him in ice, Captain America-style, until he was freed by the Teen Angels in the 20th century. Accompanying our hero is his unrevealed-until-now son, Cavey Junior. The series never revealed the identity of Junior’s mother. However, Cavey Junior’s grandmother (Cavey’s mom) made several appearances.

In the spirit of parodying superhero tropes, the prehistoric dynamic duo would meet up with Bedrock’s police commissioner and mayor to discuss the latest supervillain attack.

Bedrock’s had a few other mayors shown over the various spin-offs. However, they were all one-shot characters; none appeared as often as “Captain Caveman and Son”‘s mayor.

On a related note, in real life, the first African-American woman elected mayor of a major US city is Sharon Pratt Kelly. Pratt served as mayor of Washington, DC from 1991 (several years after the end of “Flintstone Kids”‘s run) to 1995.

Bever-Leigh Banfield voiced Bedrock’s mayor. Banfield is an actress who’s appeared in various 70s and 80s TV shows, including “Roots: The Next Generation,” “227,” “Good Times,” and “The Fresh Prince of Bel-Air.” She’s also done some other voice work, including for “Batman: The Animated Series.”