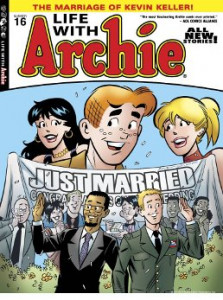 Here’s what’s of interest coming out from Archie for January 2013.

“Archie: The Married Life”‘s third volume (collecting the “Life With Archie” series) features the “marriage of Kevin and Clay” storyline in this edition. Wonder if One Million Moms will try to stage a boycott of Barnes and Noble’s graphic novel section over this one.

“Archie” this month features another intercompany crossover, this time with the cast of Fox series “Glee.” Despite never having seen “Glee” (since I usually ignore Fox unless a sporting event I can’t watch elsewhere is airing on it), it doesn’t sound that appealing a crossover for me, though Archie’s younger audience might like it. I also have heard “Glee”‘s popularity’s largely waned by this point, so not sure how much a crossover with Archie will do for “Glee” or the Riverdale bunch. (Speaking of the Riverdale bunch, Kevin’s on the cover, though an early appearance had Kevin note he dislikes musicals… hmm…)

This month’s “Kevin Keller” solicit asks whether or not Kevin’s found a boyfriend. A steady significant other’s worked all these years for Chuck Clayton…