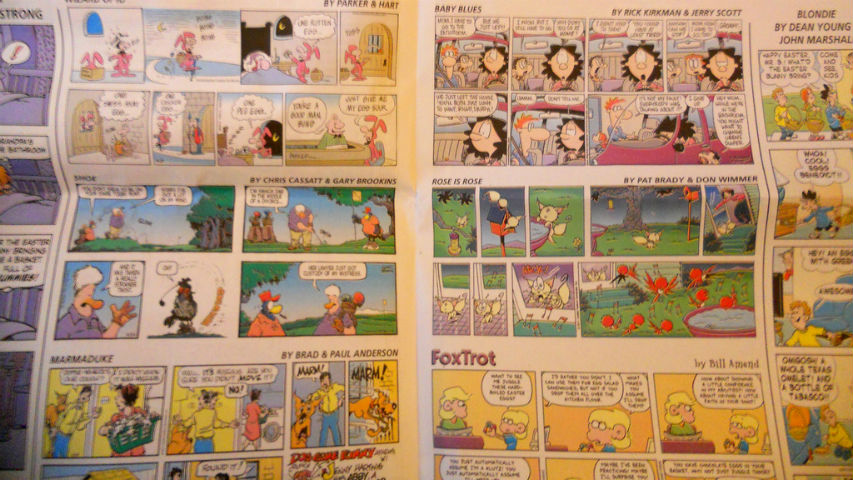 This week’s “minorities in cartoons” entry, appropriately timed for “National Coming Out Day” being today, is Lawrence Poirier, of Lynn Johnston’s long-running comic strip “For Better or For Worse.”

FBoFW (as I’ll abbreviate it) is a strip focusing on the lives of the Pattersons, a Canadian family who, unlike most other comic characters, actually aged in real time. The strip thus went from John and Elly as fairly new parents of their kids, Mike and Elizabeth, to being near retirement and grandparents (plus having a third child, April, in the early 90s).

Lawrence is the son of Elly’s friend Connie; similar to their mothers, Mike and Lawrence were fairly close friends since childhood.

In a 1993 storyline, Lawrence (by this point a teenager) came out to his mother and stepfather. Both eventually accept their son, after overcoming initial shock. Later storylines show Lawrence, as an adult, start his own landscaping business and gaining a partner.

Lawrence’s coming out made a big splash in the media at the time. Gay characters were virtually nonexistent on the newspaper comics page at the time (outside of “Doonesbury”), on top of FBoFW being considered a “family” strip. While a few newspapers cancelled FBoFW, the storyline wound up getting praise. Today, while newspaper strips are still fairly conservative (especially compared to webcomics), there’s some strips with openly gay characters.

What current DC and Marvel comics are aimed at kids?
The Disney Channel finally introduces LGBT characters
10 comics I enjoyed in 2017
How Lois Lane met Clark Kent
Share this post