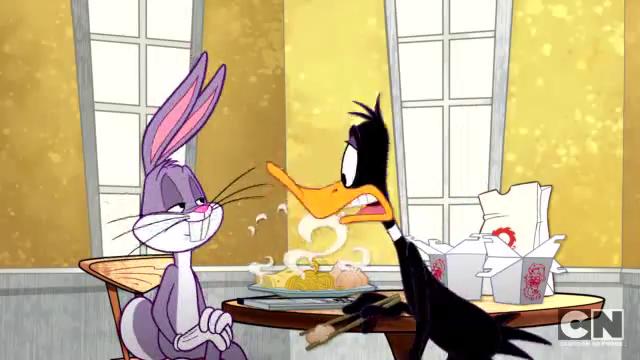 This week’s episode of “The Looney Tunes Show” was better than last week’s, with some actually amusing moments. Still, I’m not sure if I’ll stick around as a viewer of this show…

The plot: Daffy accidentally sends a nasty, hate-filled email to almost everyone he knows, and tries to prevent Tina from reading it before it’s too late. Meanwhile, Bugs tries to get into Lola’s annual family photo against her wishes (after he’d chipped his tooth).

The amusing moments in this episode:

Meanwhile, the show’s usual sitcom elements are still present here. There’s a bit more slapstick (particularly toward the end), but not as much as there could be; Yosemite Sam’s reaction at the end would’ve been funnier with his trademark firearms (yes, I know, firearms in a slapstick setting are all but banned in a modern TV cartoon). I’m still not a fan of Lola in this series, though at least she’s a bit more “focused” than usual in this episode. No “Merrie Melodies” song number this week, unfortunately.

As for next week, as I said above, I’m not sure if I’ll be back. While this week’s episode was an improvement, I’m tired of not looking forward to viewing each week’s episode, especially given the number of “misses” versus “hits” in season one. There’s also my dislike of the show’s whole sitcom tone, how Daffy and Bugs are written, and the lack of slapstick. At least it’ll be a half-hour (plus the time it takes to write these posts) out of my week that’d be back…