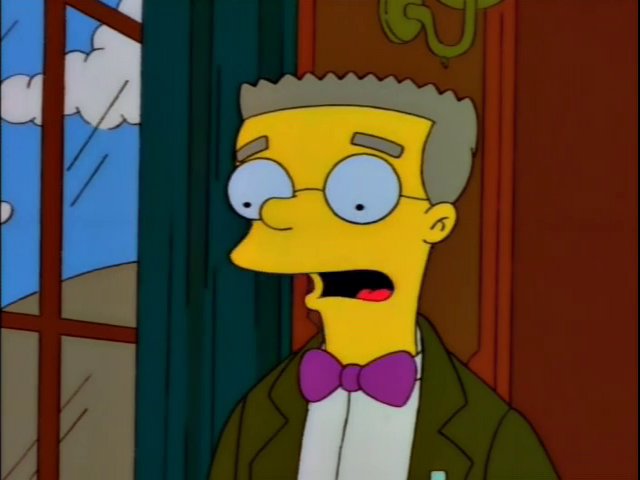 Rounding out the list of gay and lesbian cartoon characters I’ve written about for June (June being Gay and Lesbian Pride Month), I’ll finish off with Waylon Smithers. Of course, he’s the most well-known (if technically closeted) gay character on “The Simpsons.”

Smithers’ voice was first heard in the very first Simpsons episode (“Simpsons Roasting on an Open Fire”). However, Smithers (his first name’s rarely used) first actually appeared in the first season episode “Homer’s Odyssey.” There, through an animation error, he appeared dark skinned. The writers didn’t intend Smithers to be African-American. Thus, this was soon corrected for all future episodes.

Smithers works as Mr. Burns’ assistant, usually assisting Burns in his various schemes. Smithers also sometimes serves to offer advice and as a voice of reason. At least, to the extent such is possible for someone as evil and anachronistic as Burns. One such instance is pointing out to Mr. Burns in the third season’s “Homer At the Bat” that his proposed roster of softball players are all long dead (including a right fielder that’s been dead for over 130 years). Another recurring gag is Smithers reminding Burns who Homer Simpson is (“one of your [various insulting nicknames] from Sector 7G”).

The biggest recurring theme for Smithers is his fanatical obsession with/love for Mr. Burns. That’s despite A) their great age difference (Burns is 104 years old, while Smithers is in his early 40s, around Patty and Selma‘s age), B) Burns being oblivious to Smithers’ infatuation, and C) Smithers being somewhat closeted. One example is in the fifth season episode “Lisa vs. Malibu Stacy.” Lisa accidentally sees a tacky, suggestive screensaver Smithers cobbled together from clips of Burns speaking. (Smithers to Lisa: “um…you probably should ignore that.”)

Smithers also has a low-level fear of people finding out he’s gay. The eighth season’s “The Springfield Files” sees such an instance, when Burns asks Smithers an ambiguously worded question.

Harry Shearer voices Smithers, as well as Mr. Burns and multiple other secondary characters in the series.